US Faces New Cyberattack, Biden Administration Prepares To Strike Back Against Its Major Adversary

The Biden administration is facing a new cyberattack that raises the question of whether the US needs to hit back at another global adversary, China, at a time when the US is preparing to begin hitting back against Russia for the large-scale cyberattack targeting of American government agencies and companies discovered late last year.

Biden administration prepares to respond to a cyberattack

Taken together, the responses will begin to shape President Biden's new administration's approach to worsening cyberconflict, as well as if he will find a way to place a bigger punishment on adversaries that routinely exploit weaknesses in government and corporate defenses to spy, steal intelligence, and potentially harm critical components of the nation's infrastructure. Officials anticipate the first big action in the next three weeks, with a series of hidden counter-strikes on Russian networks that will be visible only to President Vladimir V. Putin, his security forces, and military, but not to the rest of the world. 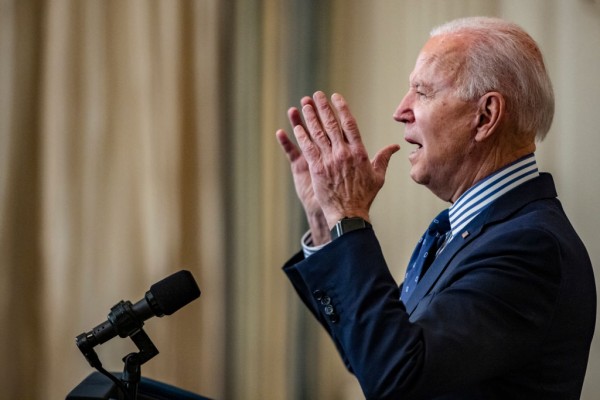 (Photo : Samuel Corum/Getty Images)
WASHINGTON, DC - MARCH 06: President Joe Biden speaks from the State Dining Room following the passage of the American Rescue Plan in the U.S. Senate at the White House on March 6, 2021 in Washington, DC. The Senate passed the latest COVID-19 relief bill by 50 to 49 on a party-line vote, after an all-night session.

Officials said the strikes would be supplemented with international sanctions. At the same time, there are few fully successful sanctions remaining to be enforced.

Besides, President Joe Biden's executive order was issued to speed up federal government networks' hardening after the Russian hacking. It was undetected for months before a private cybersecurity company uncovered it.

Following the widespread disclosure of a massive breach of Microsoft email systems used by small companies, city governments, and, by some reports, key military contractors, the problem has taken on additional urgency at the White House, the Pentagon, and intelligence agencies in recent days.

The attackers were identified as a state-sponsored Chinese party, and Microsoft quickly issued a patch to enable users of its applications to cover the hole as per The New York Times. However, this sparked a race between those in charge of patching the networks and a whole slew of new attackers - including, according to Microsoft, several other Chinese hacker parties - who began using the same vulnerability this week.

Read also: WHO To Throw Away Interim Report Plans on COVID-19 Origin Investigation

Russia spreads disinformation on COVID-19 vaccines used in the US

A State Department spokesperson reported to CNN on Sunday that online outlets controlled by Russian intelligence are sharing false information about two of the coronavirus vaccines used in the United States. According to a spokesperson for the agency's Global Engagement Center, three Russian sources - News Front, New Eastern Outlook, and Oriental Review - are spreading disinformation.

The disinformation was not just about the virus but also about "international organizations, military conflicts, strikes, and any controversial problem that they may manipulate." According to its website, the GEC is in charge of recognizing, understanding, exposing, and countering foreign state and non-state misinformation and disinformation activities aimed at weakening or affecting the policies, defense, or unity of the United States, its allies, and partner nations, The Wall Street Journal reported.

The push arrives as the US and other countries compete to vaccinate citizens with three vaccines produced in record time by Pfizer/BioNTech, Moderna, and Johnson & Johnson. In recent months, US officials have been trying to boost public trust in vaccines. This was after surveys revealed a worrying degree of vaccine discomfort among certain residents. However, this has declined as the rollout advanced.

According to the Journal, a Kremlin spokesperson denied that the country's security services were behind the disinformation operation. "It's a load of nonsense. Every condemnation of vaccination has nothing to do with Russian special forces," Dmitry Peskov, the spokesperson, told the newspaper.