In the UK, the government struggled to reach the deadlines to release COVID-19-related contracts because it moved "incredibly quickly" to secure equipment at the height of the pandemic, Health Secretary Matt Hancock said. 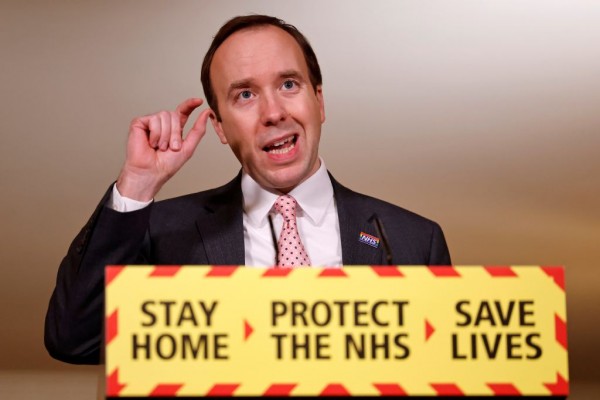 (Photo : Tolga Akmen - WPA Pool/Getty Images)
LONDON, ENGLAND - FEBRUARY 08: Health Secretary Matt Hancock speaks during a virtual press conference at 10 Downing Street to give an update on the coronavirus Covid-19 pandemic on February 8, 2021 in London, England. Undocumented migrants in Britain will still be able to get Covid vaccines without being subject to status checks, the government said on Monday.

Hancock responded Friday to a court decision that found that he had not met with government transparency regulations, as per Bloomberg via MSN. The group that filed the case said that if the state "continues to fail to publish contract award notices within 30 days it is doing so in full knowledge it is breaching the law."

In an interview with Sky TV Sunday, Hancock said at the midst of the COVID-19 pandemic, the administration missed some deadlines. However, they managed to publish the contracts on average 47 days after they signed in the "heat of the crisis." He did not answer the question if he would resign over the decision.

"We acted incredibly fast, and some of the paperwork was delayed a bit," he said. He defended ministry workers who were focused on protecting and saving lives with personal protective equipment.

From the availability of medical equipment to student examination results, Prime Minister Boris Johnson has faced several lawsuits over his administration's response to the COVID-19 pandemic. In Friday's event, critics urged the court to investigate contracts that were awarded during the early days of the outbreak to companies.

Judge Martin Chamberlain said in the ruling that Hancock spent significant amounts of public money on pandemic-related procurements during 2020. Chamberlain said the public had the right to know who received the money, what it was being spent on, and how relevant contracts were awarded.

After the ruling, the Good Law Project urged Hancock to report unpaid contracts and names of firms that passed through a 'VIP lane' to be granted purchasing decisions on materials for COVID-19. The National Audit Agency had noticed that all contracts were awarded appropriately, Hancock told the BBC.

'Time needs to be taken' lifting the lockdown

Matt Hancock warned that amid boosting efforts to roll out vaccines to all UK adults by the end of July, the government would take its time to remove the coronavirus lockdown. Ahead of Boris Johnson's big revelation of his roadmap out of restrictions tomorrow, the Health Secretary said it was 'right to be careful.' Hancock announced this morning that at least one dose of the COVID-19 vaccine would be given to every adult in the country by the end of July.

According to Daily Mail, the government previously said it hoped to reach those aged 18 and over by the autumn, but Johnson plans to significantly boost the popular program. As previously indicated, Hancock has stated that anyone over 50 would be given at least the first dose by April 15 rather than by May. He also reported that one-in-three adults have already been vaccinated in England.

But he said to Sky's Ridge on Sunday, asking about the pace of the lockdown lift, "It's right to be cautious, it's incredibly important." There are still about 20,000 persons with COVID-19 in the hospital right now.

Read also: Life Expectancy Drops by a Year, While 20 Million Years Are Lost Due To COVID-19, Study Claims

Hancock claimed the deadly mutant COVID-19 variants from Brazil and South Africa are falling in the UK. This morning, the Health Secretary said there was proof that the more stringent measures - including touch tracing and more restrictive border measures - had slowed down the spread of new strains.

On Sunday, speaking to Sophy Ridge, Hancock said: "We now have a much better caution in place, so it is important to monitor anyone coming into the country and sequence the outcomes of those tests. And we also have a powerful set of actions that work very specifically with the local authorities in the areas where a new variant is found."

But he warned that when the lockdown is lifted, data must be carefully monitored, The Sun reported. To track the spread of the new variants, surge testing has been placed in some UK areas.