Three separate sticky bomb attacks killed at least five people and injured two others in the Afghan capital Kabul on Saturday, a police officer said, during a wave of violence in the war-torn country. 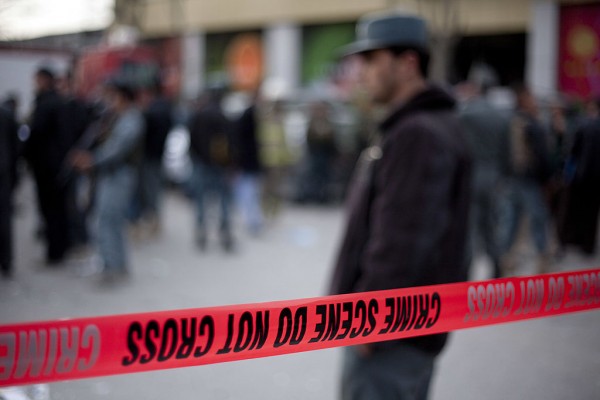 (Photo : Majid Saeedi/Getty Images)
KABUL, AFGHANISTAN - JANUARY 28: An Afghan policeman walks over shards of glass and paper at the site of an explosion near 'Finest' supermarket on January 28, 2011 in Wazir Akbar Khan, Kabul, Afghanistan. According to reports a suicide bomber killed at least eight people, including two foreigners when the bomb exploded in the supermarket. The Taliban are claiming responsibilty for the blast, suggesting that it was targeted at a US security contracter.

Sticky bombs, explosive devices with magnets connected to cars and exploded by remote control or timer, have become the majority of Kabul's bomb attacks in recent months.

The first explosion hit a civilian car injuring both passengers inside the vehicle. The second blast hit a northwestern Kabul vehicle, where soldiers from the national army were driving, killing two soldiers and a civilian passerby. A police vehicle in western Kabul was hit by a third bomb, killing two police officers.

As peace talks between the Taliban and the Afghan government in Qatar have failed, Afghanistan has seen a national increase in attacks, targeted killings, and battlefield violence. It has been more than a month since the sides last discussed to decide how to proceed.

Meanwhile, the U.S.-Taliban ceasefire agreement signed on February 29 last year is being reviewed by the current U.S. government. Washington's pledge to a May 1 withdrawal of all foreign forces from Afghanistan was a big part of the resolution.

Russia also stepped up efforts to try to find a way forward. On Friday, Russian President Vladimir Putin's Special Envoy for Afghanistan, Zamir Kabulov, met with Pakistani leaders, including Army Chief Gen. Qamar Javed Bajwa, to negotiate the peace process. Since the Taliban leadership retains houses and headquarters in Pakistan, it is seen as a critical player in the Afghan peace process.

Read also: Life Expectancy Drops by a Year, While 20 Million Years Are Lost Due To COVID-19, Study Claims

No rebels claimed the series of bomb attacks

In recent months, most bomb attacks in Kabul's capital have been sticky bombs-explosive magnet devices connected to vehicles and exploded by remote control or timer. Police from Kabul said investigations were ongoing, as per Pakistan Today.

Police in Kabul suspected that they might have used the sticky explosives for the attacks. The Special Inspector General for Afghanistan Reconstruction, known as SIGAR, announced earlier this month that Taliban attacks in Kabul, the Afghan capital, are also rising, with growing targeted killings of government officials, civil society leaders, and journalists,  Republic World reported.