Impeachment Trial: Trump Lawyers Argue 'Majority in the House' Is Afraid of Facing Him as Opponent in 2024

On Tuesday, former President Donald Trump's lawyers made their opening statement in the Senate impeachment trial, arguing that House Democrats impeached Trump because they were fearful of facing him in 2024 as a political rival.

Castor: Democrats want to prevent Trump from running in the future 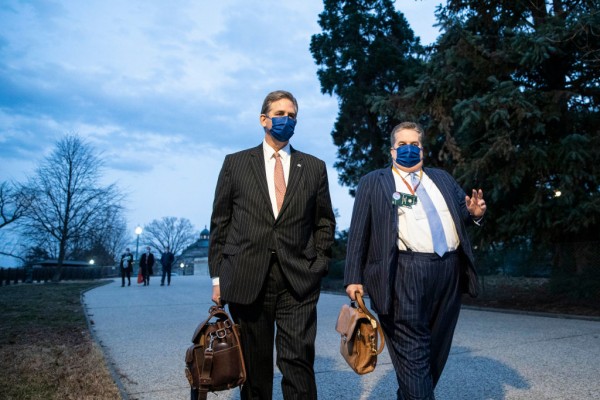 (Photo : Sarah Silbiger/Getty Images)
WASHINGTON, DC - FEBRUARY 09: Bruce Castor, defense attorney for former President Donald Trump (L), departs the U.S. Capitol following the first day of the second impeachment trial of former U.S. President Donald Trump on February 9, 2021 in Washington, DC. House impeachment managers made case that Trump was singularly responsible for the January 6th attack at the U.S. Capitol and he should be convicted and barred from ever holding public office again.

"You will never hear anyone representing former President Trump say something but what happened in the storming and breach of the Capitol on January 6 should be denounced in the strongest terms," Bruce Castor, one of Trump's lawyers, said on the Senate floor.

Castor, repeating points raised during pre-trial briefs by him and other lawyers, said that it is against the Senate's Constitution to stage a trial to prosecute a sitting president, implying that Democrats only intend to keep Trump from running in the future or retaining office.

"We really are here because the majority in the House of Representatives do not want to face Donald Trump in the future as a political rival, that's the real reason we're here," he added, noting that "the political pendulum will shift one day; this chamber and the chamber across the way will change and partisan impeachments becoming commonplace."

According to Epoch Times, the House impeached Trump last month for supposedly inciting unrest in the U.S. Capitol breach on January 6. On his part, Trump refuted the charges, and his attorneys said that he is safe under the First Amendment. There were no criminal cases filed against the former president.

Meanwhile, one of the House managers, Rep. Joe Neguse (D-Colo.), said that there is "no exception to the impeachment power, that presidents cannot commit crimes in their final days and escape any congressional response." Neguse fought back against the argument that after leaving office, Trump cannot be impeached.

Read also: Report: Biden has Awkward, Flirty Moment After Complimenting a Nurse for Her Youthful Appearance

David Schoen, one of former President Donald Trump's leading lawyers in his second impeachment hearing, argued Tuesday that the country would be more divided by the hearings, Newsweek on MSN reported.

On the first day of the Senate trial, Schoen said, attacking the Democratic House impeachment managers' argument that impeachment will be a unifying power, "This trial will tear this country apart, perhaps like we've only ever seen once in history,"

"They say you need this hearing before the country can heal and the nation cannot heal without it. I say our nation cannot possibly heal with it," added Schoen.

You will open up fresh and deeper wounds in the country with this hearing because many Americans see this procedure for just what it is: an excuse for a group of partisan politicians to remove Donald Trump from the American political scene. It is also an attempt to disenfranchise 74 million-plus American voters and others who dare to express their American political views and vision, as per Schoen.

Since thousands of his followers stormed the U.S., Trump has been accused of "incitement of insurrection" at the Capitol on January 6 to disrupt the Congressional confirmation of the Democratic President Joe Biden's electoral victory.

On January 13, the House of Representatives voted to impeach Trump, exactly one week after the deadly insurrection and a week before he was about to leave the White House. The bipartisan vote made Trump the first president to be impeached twice in U.S. history.

On Tuesday, the trial continued with a four-hour discussion on whether the case is constitutional because Trump is no longer in office.

In a 13-minute video recapping the incidents on January 6, the House impeachment administrators opened their claims. The compilation started with a video of a 70-minute address by Trump at a "Save America" rally. It featured rioters' recordings screaming "fight for Trump" and "we are listening to Trump."

Representative Jamie Raskin (D-Md.) said after the video aired, "You ask what a high offense and misdemeanor is under our Constitution. This is a serious crime and a misdemeanor. If it's not an impeachable offence, then there's nothing like that."

Attorney Bruce Castor Jr. opened the former president's defense. He argued that to avoid partisan impeachments in the future, the Senate would refuse the trial. Schoen also claimed that the hearings were partisan and showed a small compilation video of Democratic leaders calling for Trump's resignation after four years in office.

Read also: Biden Does Not Want Trump To Receive Intelligence Briefings, Claims He Might 'Slip and Say Something'