Apple will temporarily close more than 20 retail stores in North Carolina, Georgia, and Texas as the COVID-19 cases continue surging in the said states.

Apple won't be open to the public in several locations 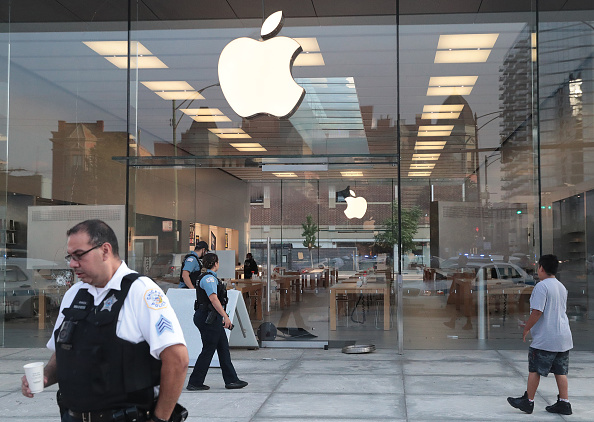 (Photo : Scott Olson/Getty Images)
Police Shooting Leads To Widespread Looting And Violence In Chicago CHICAGO, ILLINOIS - AUGUST 10: Police inspect an Apple store that had windows broken after parts of the city had widespread looting and vandalism, on August 10, 2020 in Chicago, Illinois. Police made several arrests during the night of unrest and recovered at least one firearm.

Bloomberg first spotted an update on Apple's website indicating five Apple stores in North Carolina, five in Georgia, and about a dozen in Texas would not be open to the public after completing their regular hours Friday evening.

Apple's store closures include major cities like Atlanta and Houston, as per Yahoo. However, you can still visit one of those stores through to January 18 if you left a device for repair or have an appointment to pick up an online order.

The company's spokesperson told Bloomberg that the temporary closing of stores in several areas is due to the current COVID-19 pandemic in some of the communities the tech giant serves.

The iPhone maker's move is in the abundance of caution as it closely monitors the situation and looks forward to having its customers and teams back as soon as possible.

Previously, Apple closed over 50 retail stores in California because of the surge of COVID-19 cases last month. Aside from these concerns, Apple has temporarily shuttered its stores in the Washington area ahead of President-elect Joe Biden's inauguration on Wednesday.

Amidst store closures, Apple faces another battle as a federal judge denied its bid to set aside or reduce a $502.8 million infringement verdict that favors VirnetX Holding Corp. The federal judge also awarded royalties and interests to boost the tech giant's total payout in two lawsuits to more than $1.1 billion.

According to Reuters, U.S. District Judge Robert Schroeder issued a decision that declines Apple's petition for a new trial and many other claims. Some of these claims include jurors who should have been told the U.S. Patent and Trademark Office deemed VirnetX's claims "unpatentable" and VirnetX's award should not exceed $113.7 million.

In October, jurors discovered that Apple infringed on two VirnetX patents to secure networks called virtual private networks, to which owners of different iPhones and iPads may connect.

The future royalties should be zero, or no more than 19 cents per unit, Apple said.

VirnetX, based in Zephyr Cove, Nevada, and Apple, based in Cupertino, California, has been fighting in patent litigation for more than ten years. In March 2020, the iPhone maker paid VirnetX $454 million after the Supreme Court rejected hearing the company's appeal in an earlier patent case.