More money would be given to unemployed workers as part of President-elect Joe Biden's 'American Rescue Plan.' 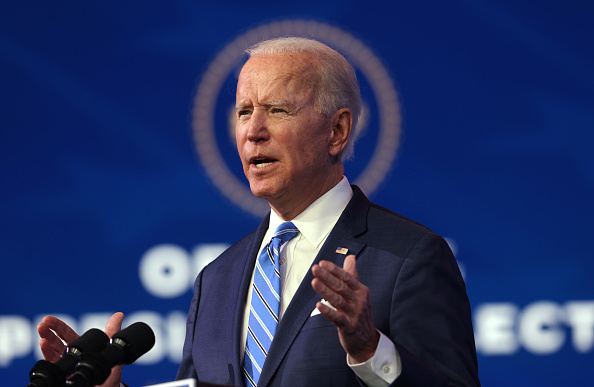 (Photo : Alex Wong/Getty Images)
President-Elect Biden Delivers Remarks On COVID-19 Pandemic And Planned Response WILMINGTON, DELAWARE - JANUARY 14: U.S. President-elect Joe Biden speaks as he lays out his plan for combating the coronavirus and jump-starting the nation’s economy at the Queen theater January 14, 2021 in Wilmington, Delaware. President-elect Biden is expected to unveil a stimulus package with a price tag of trillions of dollars including a $1,400 direct payment to individuals who have been struggling with the economic turmoil caused by the COVID-19 pandemic.

Before the inauguration, President-elect Joe Biden announced Thursday his plans to help the economy to fall back. The so-called 'American Rescue Plan' will include more weeks of unemployment benefits, the third round of stimulus checks, expansion of vaccines, an extension of the eviction moratorium, and more provisions to help the Americans.

The 'American Rescue Plan' would extend the unemployment benefits established in a $900 billion relief package passed in late December. The previous bill was the CARES Act's extension, which was initially signed into law in March 2020. According to CNET, Biden claims his plan is the first step to help people recover in the financial aspect.

On Thursday, when he unveiled his plan, Biden said millions of Americans, through no fault of their own, lost their dignity and respect coming with a paycheck or job loss amid the pandemic.

"Millions of Americans never thought they'd be out of work. Many of them couldn't even envision the idea of facing eviction, waiting for hours in cars to feed their families as they drive up to a food bank," he added.

Read also: Stimulus Bill Includes $25 Billion in Rental Assistance. Are You Qualified? Here's How to Apply

What will Biden's plan do for unemployed workers?

Biden's $1.9 trillion COVID-19 relief package aims to extend the unemployment benefits until September ends and raise the weekly federal bonus from $300 to $400. The current benefit is less than the $600 weekly bonus, which is $300.

Biden also wants to see the unemployment benefits as automated triggers, as per The Washington Post. The aid provided would change properly if a specific economic indicator changed, including the unemployment rate.

Would the new unemployment benefits be retroactive?

There has been no indication that the unemployment benefits will be retroactive. However, it could change when a bill makes its way through Congress or states could determine it.

A Democrat from New York, Representative Alexandra Ocasio Cortex, told The Washington Post Thursday stimulus checks should be $2,000 instead of $1,400.

Read also: More than 90,000 Americans would Die Due to COVID-19 in Next Three Weeks, CDC Forecast Shows

How long would the $400 extra unemployment benefit last?

The president-elect aims to extend benefits to last until September. But it's too early to see when they would start if Biden's proposal becomes a law.

In December, the $900 billion COVID-19 relief package was passed and had an additional 11 more weeks of enhanced unemployment benefits. The unemployment assistance includes $300 weekly checks, an extension to services the states provided.

These benefits have an initial expiration of until March 14, but there is a phase-out period until April 5 since recipients did not receive any payments from their state's unemployment offices.