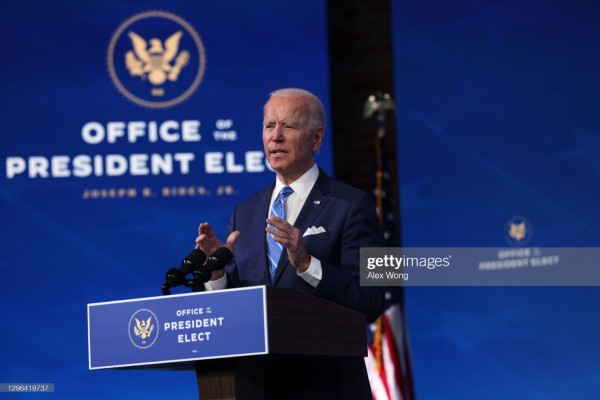 (Photo : Alex Wong/Getty Images)
WILMINGTON, DELAWARE - JANUARY 14: U.S. President-elect Joe Biden lays out his plan for combating the coronavirus and jump-starting the nation’s economy at the Queen theater January 14, 2021 in Wilmington, Delaware. President-elect Biden is expected to unveil a stimulus package with a price tag of trillions of dollars including a $1,400 direct payment to individuals who have been struggling with the economic turmoil caused by the COVID-19 pandemic. (Photo by Alex Wong/Getty Images)

The 'American Rescue Plan' includes proposals that will help combat the COVID-19 pandemic and its effect on the economy. The plan has an initial focus on expansions of the virus testing capacity and the nation's vaccination program.

Read also: More than 90,000 Americans would Die Due to COVID-19 in Next Three Weeks, CDC Forecast Shows

According to GO Banking Rates via MSN, the unemployment rates rose with 965,000 claims this week, mostly since August. The unemployment crisis continues to reflect the effects of the pandemic in the economy. The 'American Rescue Plan' also has the anticipated direct payment of $1,400 per eligible person to supplement the $600 second stimulus payment Congress approved.

The $600 sum was half the $1,2000 per person first stimulus payment, included in the CARES Act passed last spring. In a tweet earlier this week, Biden said the $600 stimulus check is not enough when people have to choose between putting food on the table or paying rent.

CNN reported that Biden's plan expands the eligibility of dependents over the age of 17 as well as households with mixed immigration status. Besides, the program provides more aid to schools, local governments, and small businesses, particularly to those lower-income industries and communities that were hardest hit by the pandemic. The 'American Rescue Plan' aims to increase federal unemployment benefits to $400 weekly, extend unemployment payments and raise the minimum wage to $15 per hour.

Read also: Delayed Stimulus Checks: What You Need To Know

In December, the leisure and hospitality sector experienced the pandemic's effects due to several lockdowns and restrictions, while the total nonfarm payroll employment was down by 140,000. According to the U.S. Bureau of Labor Statistics, unemployment declined by 498,00 with three-quarters of losses occurring in the food and beverage industry.

The 'American Rescue Plan' that Biden will propose would provide $400 billion for COVID-19 testing and vaccines, the Washington Post projected. So far, the COVID-19 vaccine roll-out has been a failure. The lack of a clear distribution strategy in the country and the funds needed to execute that strategy left states searching for solutions.

As of January 14, 2021, approximately 10.8 million doses of COVID-19 vaccines were given, instead of the expected 20 million shots projected prior to the end of last year, as per the U.S. Centers for Disease Control and Prevention. On December 14, 2020, the vaccinations in the U.S. started.

The plan also proposes expanding the child tax credit up to $3,600 each year for every child under age six and $3,000 yearly for each child age 7-17, as per The Washington Post. Moreover, the American Rescue Plan would raise the Earned Income Tax Credit to $1,500 and be available to more taxpayers.

Biden's plan would ease households' struggle with their rental bills amid being unemployed, as it would provide $25 billion assistance and would extend the eviction moratorium until September to apply for forbearance, CNN reported.

Read also: Third Stimulus Check Plans Along with Impeachment Chaos. How Much Exactly Could It Bring You?