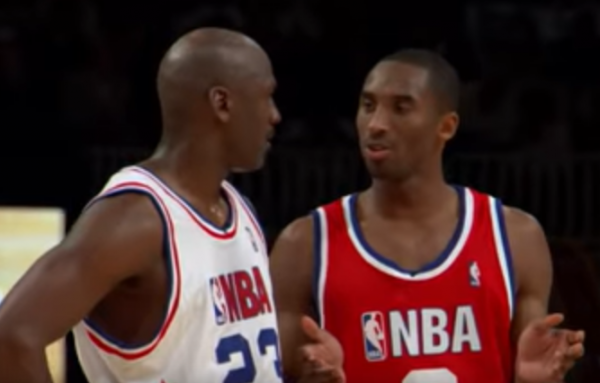 NBA fans remember this one play during Michael Jordan's last days as part of the Washington Wizards. It was when Kobe Bryant tried to attack him, with Jordan getting the foul and teasing Kobe while he was on the floor.

Several years after the incident, what was said between the two legends was finally revealed. It was all laughs and teasing between them, but the public did not know that Michael Jordan trash-talked Kobe Bryant during that sequence.

According to actor John Cusack, who saw the whole play very closely, Jordan told Kobe that he was not going to pass anyway.

The actor wrote on Twitter "Everyone cleared out - so Kobe could have MJ one on one -MJ took the charge / won the battle - they paused a beat, looking at each other wryly -well the whole fucking building knew you weren't gonna pass MJ said and they both burst out laughing .."

Jordan and Bryant are close friends and had a great relationship, with Jordan calling Bryant his little brother during the latter's memorial service last February.

They constantly show the love and respect that they had for each other. Jordan retired after two seasons with the Washington Wizards, having good matchups against Kobe, who scored 55 against him in his last play.

Kobe Bryant tragically passed away last January 26 in a helicopter crash, shocking the NBA and the whole world. Jordan was one of the most outspoken people when the tragedy happened, showing his affection for the late NBA star.

ESPN announced that the release date of Michael Jordan's upcoming documentary "The Last Dance" will be on April 19th. Sports fans are excited to watch the behind-the-scenes footage of the iconic Bulls team.

Fans are also preparing for heartbreak as the late Kobe Bryant will make a special appearance on the documentary.

Kobe has expressed his respect for Jordan and he even implemented a lot of Jordan's moves into his own game. He had the same passion and drive for the game that Jordan did and to this day, Kobe is considered to be one of the closest players to Jordan that the world has ever seen.

How athletes are paying tribute to Kobe Bryant

Kobe Bryant retired from basketball in 2015. He was a legend in the sport and is regarded as one of the best to ever play the game. He played for 20 years with the Los Angeles Lakers that concluded with him as the league's third-highest point scorer of all time.

After his passing, several players wore their tributes scrawled on their sneakers. A lot of the athletes wore shoes from Byrant's signature line with Nike, his sponsor since 2003. A guard for the Pelicans, Lonzo Ball, had "RIP Kobe" and "RIP Gianna" written on his Nike shoes. Pelican player Josh Hart sported Nike's with a Memoriam to Bryant printed on the sole of their shoes.

Montrezi Harrell of the Los Angeles Clippers and Austin Rivers of the Houston Rockets also had tribute messages on their feet. Trae Young of the Atlanta Hawks wrote Bryant's name on his shoes and swapped his usual number 11 to wear Bryant's number, which is 8, at the start of his team's game against the Washington Wizards. Bryant had mentored Young, who had 45 points and 14 assists under his belt.

Another basketball legend, Dwayne Wade, was emotional in his Instagram story talking about his friend. He wrote, "Today is one of the saddest days of my lifetime."

Kareem Abdul Jabbar talked about meeting Bryant when he was 11 or 12 years old and knowing Bryant's Father, who had also been a professional basketball player.

Bill Russell tweeted his heartbreak and shock over the tragedy, saying "@kobebryant you were my biggest fan, but I was yours."

Intermittent Fasting: Is It An Effective Weight Loss Strategy?

Looking for a Companion? These Cute Dog Breeds Are Easy to Take Care Of