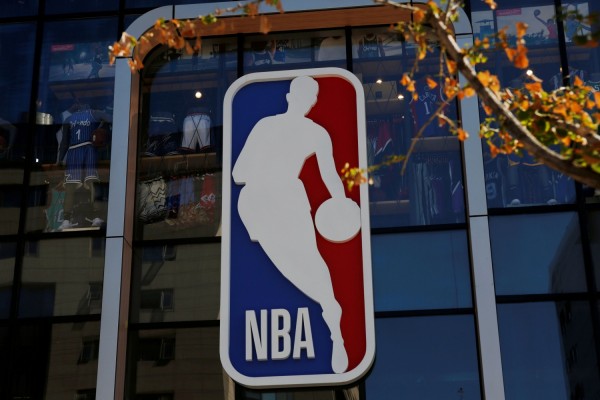 (Photo : REUTERS/Tingshu Wang/File Photo)
FILE PHOTO - An NBA logo is seen on the facade of its flagship store at the Wangfujing shopping street in Beijing, China October 8, 2019.

After being cleared of their 14-day self-quarantines, the Brooklyn Nets and the Los Angeles Lakers are now symptom-free of COVID-19.

After four Nets players and two Laker players tested positive with coronavirus, both team's organization sent them on self-quarantines to secure their safety and to avoid spreading the virus and after 14 days, both Teams made their names cleared of the pandemic.

Lakers' organization made tests available to their players after four Nets players including star Kevin Durant who tested positive with COVID-19 as they played against the Nets on March 10 just a day prior to the suspension of the NBA's regular season after Rudy Gobert, the Utah Jazz's center became the first victim in the league and because of that, physicians and public health officers recommended both teams to be tested.

Marks added that so far everybody is healthy and they are still practicing social distancing like the rest of the people and they cleared like everybody, like the rest of the team and the staff and he followed up that the entire travel party, Nets Organization right now, basketball operations department is symptom-free.

Read also: Kevin Durant Becomes 7th NBA Player to Contract COVID-19
No other NBA team was hit harder by coronavirus than the Brooklyn Nets, after the organization announced four players including NBA superstar Kevin Durant tested positive for the COVID-19 on March 17 having three asymptomatic players and one experiencing symptoms.

Despite having the virus, Durant refused to deny that he is not one of the four Nets players to test positive as he reminded everyone to be careful and do the quarantine and ended it positively saying that we're going to get through this.

The first NBA team to deal with the virus was Utah Jazz after their center Rudy Gobert tested positive prior to the game against Oklahoma City Thunder on March 11 and the following day, another Jazz's star Donovan Mitchell tested positive as well.

After the initial cases, aside from the Jazz and the Nets, Detroit Pistons big man Christian Wood, Boston Celtics guard Marcus Smart also tested positive while the Lakers confirmed that they have two cases on March 19, they remain nameless but LeBron James, Danny Green, Anthony Davis, Quinn Cook, and JaVale McGee shared in their various appearances that they COVID-19 free and even Knicks owner James Dolan and NBA reporter Doris Burke did not escape the virus.

NBA's first coronavirus patient was cleared of the illness last Friday as he posted a video of himself working out in a gym while Celtic Marcus Smart was also cleared of the COVID-19 on March 27 and plans to donate his blood plasma for research in fighting against coronavirus.

With the suspension of the NBA season remains indefinite, Marks emphasized that this is affecting a much bigger circle and he doesn't know somebody who is not directly affected.

Intermittent Fasting: Is It An Effective Weight Loss Strategy?

Looking for a Companion? These Cute Dog Breeds Are Easy to Take Care Of