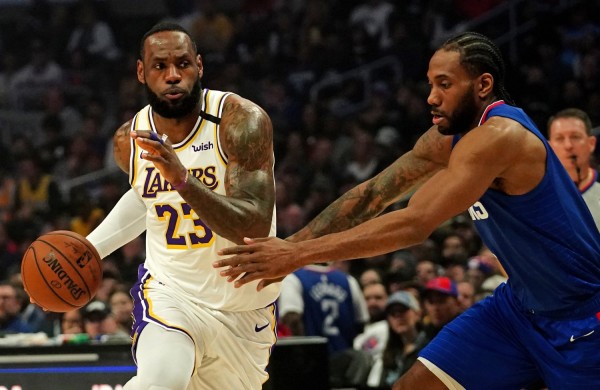 LOS ANGELES - The Lebron James-led Lakers reminded everyone that they still run the city as they outclassed their rival Los Angeles Clippers in the part three of "Battle of Los Angeles" , 112-103.

Finishing the weekend with authority, The Lakers solidified their status as they outshine their neighbor LA Clippers with "The King" proving that Kawhi Leonard is not his kryptonite dropping 28 points, seven rebounds, nine assists and two blocks alongside with Anthony Davis who cashed in 30 points and Avery Bradley draining six triples to secure the win against their rival and to wrap their "best weekend" in two years.

Despite the great defense displayed by the Lakers, Paul George, and Kawhi still managed to bank their mid-range jumpers to take the early lead in the game. But "The King" made his presence felt in the first half as he muscled his way to the paint getting opportunity to take shots at the line and for his teammates cutting the Clippers' lead into four to close the first half, 53-49.

It is a different story in the frame as the Lakers took the lead with Avery Bradley opening the second half with a triple to cut the lead and drained another three long bombs in the quarter alongside Anthony Davis who took advantage on his length and his speed. He bullied Montrezl Harrell who had a hard time guarding him, Davis showed his versatility by dropping triples and putting the ball in the rack taking "and ones" giving the Lakers a sustainable offensive firepower with Lebron James steady on his all-around playing style as the Lakers outscored the Clippers by eight points in the third quarter, 81-85.

Draining an early triple in the fourth quarter, Lebron James extended the lead to seven as he continues to slice the Clippers' defense Lebron attracted the guards kicking out the ball to Avery Bradley who did another shot beyond the arc as he finished the night with 50% three-point shooting. However, Kawhi and PG13 refused to surrender early as they tried to devise a comeback but the Lakers' defense stood tall as they denied the Clippers in the paint resulting them to take low percentage and contested shots. The Lakers extended their domination with Lebron James driving to the basket for a three-point play snapping the six-game win streak of the clippers, 112-103.

Avery Bradley stepped up for Danny green who is scoreless the entire game with Bradley tallying 24 points, three rebounds, 1 assist, and two steals 6 out of 12 beyond the arc and Kyle Kuzma grabbing a game-high 10 rebounds to backed up "the King" and AD.

Despite the great performance of 'PG13' with 28 points, seven rebounds, nine assists and two blocks, the 27 point production of Kawhi Leonard is not enough to take down the Lakers' as they managed to seal the "best weekend" for their fans.