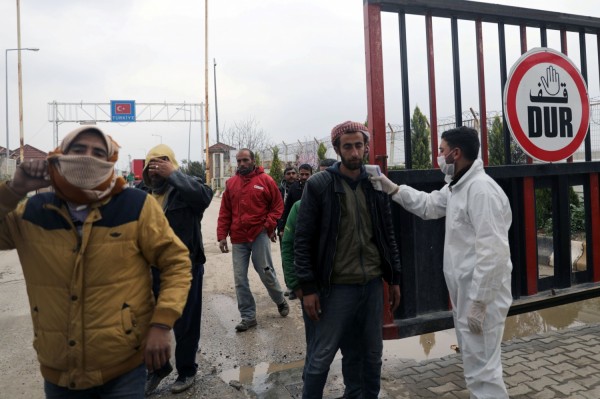 (Photo : REUTERS/Khalil Ashawi)
A health worker tests a man as part of security measures to avoid the spread of coronavirus, at the Bab el-Salam border crossing between the Syrian town of Azaz and the Turkish town of Kilis, seen from Syria, March 14, 2020.

After being devastated by nine years of war and chaos, Syria now faces the possiblity of yet another life-threatening phenomenon brought by the COVID-19 pandemic.

Doctors and aid workers stated on Monday, that the country's current situation with their hospitals ravaged in the aftermath of war and people living in flocks in crowded camps which is likely to accelerate the spread of infection.

On Sunday, the government of Syria officially announced its first confirmed COVID-19 case after several unconfirmed reports that claimed that the virus has already invaded the country but it was being covered up. The allegations were then denied by an official who rolled out their tight measures as the diseases already swarmed their neighboring countries.

Aid groups say Syria is nowhere near ready for an epidemic

In northwest Syria, which is currently under the control of rebels, no cases have been confirmed yet but there are already several patients who have exhibited possible symptoms of the diseases for weeks. According to the World Health Organization, there are already 300 test kits that will be arriving in Syria within the week.

Norwegian Refugee Council policy and advocacy adviser Rachel Sider stated that Syria's health infrastructure and basic services have almost been obliterated over the course of the war, which makes the citizens who have already suffered a lot much more vulnerable to the spread of the virus.

She also stressed that it is very obvious that the country is nowhere near prepared for an outbreak and it might not be able to handle another devastating blow.

On Monday, despite public transport being banned, flights suspended and schools shut down, pedestrians wearing masks still crowded the streets of Damascus.

Read also: Nine Doctors Fall Amid the COVID-19 Battle in the Philippines

The head of a local Damascus-based NGO said there was limited capacity to determine cases, with only one main lab testing for the virus so far. Some cases were being treated in military hospitals, the person added, asking to remain anonymous.

According to the head of a Non-Government Organization based in Damascus, they also have limited capacity to determine cases since they only have one main lab which has the capability to test for the virus. Thus, some cases are only being treated in military hospitals.

However, Damascus Hospital head Samer Khodr stated that all private and public hospitals across the country were already briefed on how to tackle the virus and that they had a national plan in place which will help them combat the virus that caused the worldwide pandemic.

The army command has even announced last Saturday to minimize public gatherings and that they have already prepped military hospitals in preparation for a possible epidemic.

According to residents, however, prices of disinfectants and masks have already skyrocketed in the country's capital and that panic buying has already gripped shoppers in previous days.

A diplomat also speculated that with the country only declaring one positive case, it is very likely that the virus is already widespread more than it is known due to the scarcity in testing capacity and lack of transparency.

However, the Syrian government remained firm on their statements and denied any allegations of covering-up cases despite its close ties with Iran, the country that received the virus' worst hit in the middle east.