Dr. Fauci Says Social Distancing is Essential to Stop US from Becoming Italy 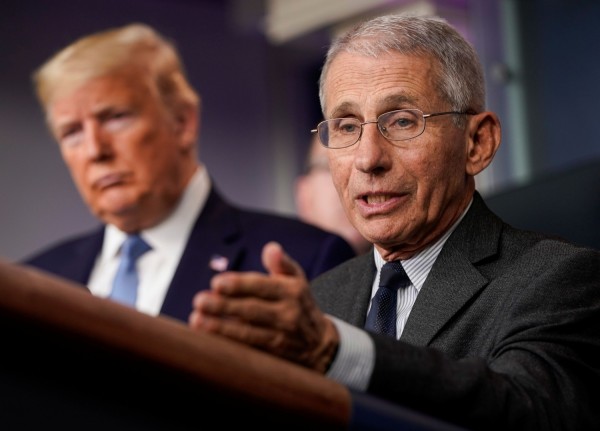 (Photo : REUTERS/Joshua Roberts)
Director of the National Institute of Allergy and Infectious Diseases Anthony Fauci speaks as U.S. President Donald Trump listens during a news briefing on the administration's response to the coronavirus disease (COVID-19) outbreak at the White House in Washington, U.S., March 21, 2020.

The director of the National Institute of Allergy and Infectious Diseases said that following the calls orders for social distancing and avoiding large gatherings is preventing the further influx of cases which slows down the spread of the virus and helps the country avoid was Italy is going through.

Italy has recently become the new epicenter of the COVID-19 pandemic after surpassing China's death toll, reporting more than 4,800 deaths and 53,000 infections.

In the U.S., the number of cases has risen to more than 26,000 and there have been 340 people who have succumbed to the disease.

In efforts to control the widespread of the disease, public health and government officials have encouraged Americans to observed social distancing and avoid going to crowded places.

Moreover, Fauci has also praised the work of the private sector in responding to the outbreak. He also expressed gratitude to those who have stepped up and produced ventilators, personal protective equipment, and other vital resources that are needed by health care workers combating the diseases on the front lines.

He further said that the companies are stepping forward on their own and praised them for their extraordinary spirit to join the battle against the virus.

While the cities and states have been implementing measures to control the spread of the virus, the trend of the cases continues to go upward, most especially in New York which now has 15,000 cases, 9,000 of which are from New York City alone.

According to NY Governor Andre Cuomo, there is already scarcity of equipment in the state, but Fauci assured them that the federal government would provide the needed equipment to help the states.

On Sunday, Cuomo also said in a press conference that they are already taking measures to help in the fight against the pandemic. He also said that they have plans to convert hotels and nursing homes into temporary hospitals in order to cater to more patients.

Moreover, Fauci also addressed his discussion with President Trump regarding the hydroxychloroquine and azithromycin drug cocktail, which Trump referred to as a "possible game-changer" amid this crisis.

Fauci indicated that the president has hard "anecdotal" evidence of the effectiveness of the drugs and that Trump is approaching the issue from the standpoint of a layperson, while he, on the other hand, is looking at things from a scientific standpoint.

Fauci, however, clarified that he was not disagreeing with Trump with regards to the anecdotal evidence that the drugs may work but insisted that it is his job to make sure the drugs are safe and will work based on scientific evidence. He also said that he understands that the president is only trying to bring people hope amid the fear and panic brought by the virus.

Horror Movies Where No One Dies: Movies Perfect for Halloween