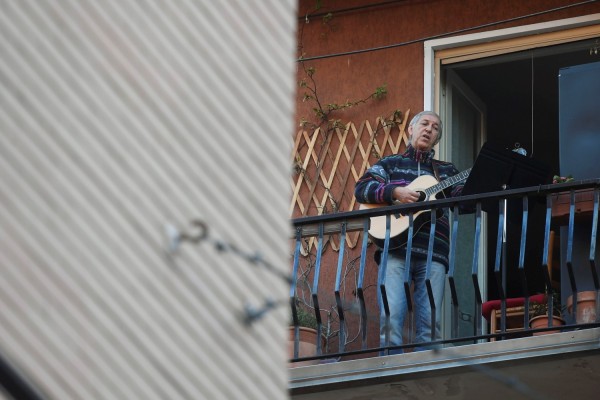 (Photo : REUTERS/Daniele Mascolo)
A man plays the guitar and sings from a balcony to raise morale on the sixth day of an unprecedented lockdown across of all Italy imposed to slow the outbreak of coronavirus in Milan, Italy March 15, 2020.

Amid the nationwide lockdown due to the COVID-19 outbreak, Italians across the country have been singing from their balconies as a symbol of solidarity and as an effort to boost each one's morale as the country faces one of the largest hit of the pandemic.

After Italian Prime Minister Guiseppe Conte announced the nationwide lockdown and its restrictions that virtually shut down all daily activities except for a few establishments such as grocery store, pharmacies and banks, the internet was flooded with videos of Italian neighborhoods out on their balconies singing together.

Residents of apartment buildings and tower blocks from the cities of Salerno and Napales in the south, to the Sicilian Capital Palermo up to the northern city of Turin, sang, played instruments and even brought out DJ equipment on to their balconies in a trend to promote the nation's solidarity and to let no one feel alone despite being unable to leave their homes.

In one Roman district neighbors entertained one another as they sang a rendition of the folk song Volare together. Moreover, in Florence, Maurizio Marchini, an opera singer entertained people as he sang the Puccini aria Nessun Dorma from Turandot.

The activity has even brought people closer together even if they were only able to see each other from balconies. According to a worker for Florence's water company narrated how a couple with a small child appeared from the balcony of a flat in front of his and waved to him despite never meeting each other in person before.

Two music teachers from the Fiesole music school, Claudia Bucchini, and Andrea Zucco, also performed in their balcony. Lewis Capaldi, a Scottish singer expressed his appreciation of a quarantined singer who sang a rendition of one of his songs from the balcony.

Several videos of the Italian citizens singing and performing in their balconies to keep up their morale in the midst of the deadly outbreak have already taken social media by storm. However, there are quieter neighborhoods that have been campaigning through social media and encouraging Italians who are stuck in their homes to put up placards with pictures of rainbows along with the words "andra tutto bene" which translates to "everything will be okay."

In addition, millions of children who are stuck at home due to closure of the schools have also started their own campaign by leaving hand-drawn notes in Italian bearing the message "don't give up" and "hang on in there" if translated.

Italy has by far received the hardest-hit of the virus in Europe. The country's confirmed cases have already reached more than 17,600 and the death toll has reached 1,266. Travel has been banned all over the country unless otherwise necessary. Professional or health grounds are only those that are certified to be necessary reasons to be out, hence leaving approximately 62 million of the country's population inside the confines of their homes.