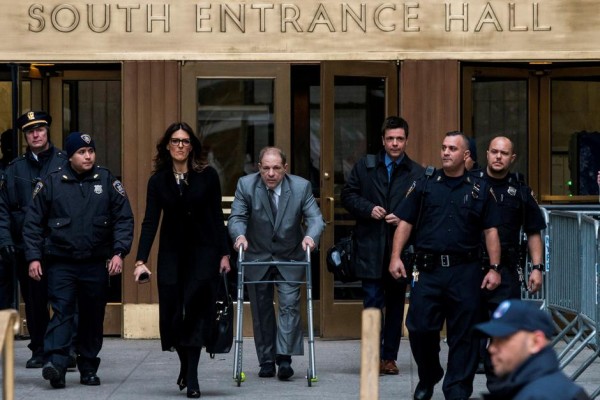 After being deadlocked on most of the serious charges of the case last week, the jurors in the sexual assault trial of movie mogul Harvey Weinstein begin their fifth day of deliberations for the charges against the accused, Monday.

The jury comprised of seven men and five women, started deliberation last Tuesday in a criminial court in Manhattan. Per Reuters, last Friday, the jury asked the judge if they could be hung on two counts of predatory sexual assault charges and be unanimous on others including charges of first-degree rape.

If convicted on the predatory assault charges, this would give Weinstein a possibility of a life sentence and would indicate that he is a repeat sexual offender. Two of the three charges against him carry prison terms up to 25 years and the other carries a sentence of up to four years.

According to four legal experts, the jury's line of questioning suggested that they were already at the brink of a guilty verdict on at least one of the five counts that are filed against the producer of famed movies, "Shakespeare in Love" and "The English Patient."

The esteemed producer has pleaded not guilty on all allegations. According to Page Six, a source inside Weinstein's defence team that the speculations about the verdict are premature and would be a mistake.

Based on a former prosecutor, Paul Callan, the possibility of an acquittal cannot be ruled out just yet since the deliberations resume after a weekend break and he said that anything can still happen after a weekend of reflection.

In last week's trial, a former production assistant Mimi Haleyi testified against Weinstein claiming that the producer invited her to his home in Manhattan back in 2006 where he backed her into a bedroom and forcibly performed oral sex on her.

In addition, Jessica Mann said that she had an extremely degrading relationship with Weinstein soon after they met. The relationship never included sexual relations, not until Weinstein allegedly raped her in March of 2013.

Furthermore, HBO's "The Sopranos" star Annabella Sciorra, said in her testimony that one winter night around 1993 or 1994, Weinstein came to her apartment in New York where he forced oral sex on her and raped her.

Sciorra's accusation, however, is too old to be charged as a separate crime, yet it was introduced by the prosecutors as an additional factor to strengthen their predatory sexual assault charges.

During Thursday and Friday's deliberations, the jurors seemed to focus on Sciorra's allegations asking to review evidence that is related to her testimony. If the jury finds that Weinstein committed the assault against Sciorra and at least one of the alleged sexual advances against Mannor Haleyi, he can be convicted for the charges of predatory sexual assault.

As per Julie Rendelman, a legal expert, a conviction on one of the lesser charges was likely, adding that the complexity of the predatory sexual assault charges may be the reason that the jurors got confused and asked for extended deliberation.