New Zealand Admits It Can No Longer Stop the Spread of COVID-19; Country To Issue Vaccine Mandate

Just days after admitting it can't fully eliminate the virus, New Zealand said it would issue a COVID-19 vaccination requirement for health care professionals and teachers. 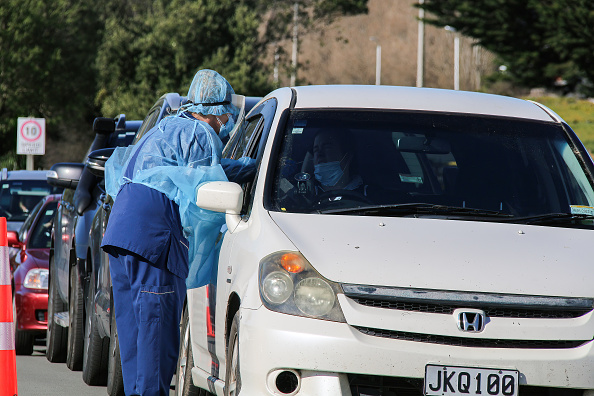 (Photo : Adam Bradley/SOPA Images/LightRocket via Getty Images)
Health workers walk to people in their cars at a Covid testing station in Christchurch

New Zealand Admits COVID-19 Could Not Be Completely Eradicated

In a recently published article in Newsweek, last week, Prime Minister Jacinda Ardern acknowledged that earlier efforts to avoid mass infections, such as lockdowns and contact tracing, were ineffective in eradicating the virus in New Zealand.

COVID-19 Response Minister Chris Hipkins stated that although many in the professions had previously had their vaccines, they couldn't take any chances, particularly since they work with ill patients and small children who haven't yet been authorized to get inoculated.

Doctors, pharmacists, community nurses, and other healthcare professionals must be completely vaccinated by December, while teachers and other education employees must be fully vaccinated by January, according to the new requirement.

The news comes as New Zealand fights a highly transmissible Delta variant pandemic in Auckland, the country's biggest metropolis. The mandate received positive early feedback from organizations representing impacted employees, according to a published article in The Lancet.

Dr. Samantha Murton, president of The Royal New Zealand College of General Practitioners, said that given the rapid expansion of Delta throughout the nation, this is a bold but essential demand to make.

Auckland To Stay in Lockdown for Another Week

Ardern said on Monday that Auckland will remain under lockdown for at least another week, with the Waikato and Northland areas nearing the end of the lockdown on Thursday if no major spread of the virus was discovered, according to a published report in Financial Times.

Since the pandemic was detected, Auckland has been under lockdown for almost two months. On Monday, 35 additional local cases were discovered, increasing the total number of patients to over 1,600. As a first step toward the country's reopening, Ardern has urged citizens to get vaccinated.

The government is preparing a "Super Saturday" vaccination campaign this weekend, which it compares to an election day, with vaccination clinics operating all day and into the evening. Approximately 68 percent of New Zealanders have received at least one dose of the vaccination, with 47 percent having received all three doses. The percentages increase to 82 percent and 57 percent, respectively, among those aged 12 and up.

On Monday, the government announced an early purchase deal for 60,000 courses of an experimental new tablet developed by Merck, which is still awaiting clearance from New Zealand authorities. If authorized by authorities, including the US Food and Drug Administration, the medication, molnupiravir, would be the first to treat COVID-19.

Furthermore, New Zealand's Prime Minister Jacinda Ardern said she intends to give a record 100,000 COVID-19 vaccine shots in a single day during a major vaccination campaign on Oct. 16, as part of her efforts to speed up vaccinations before lifting restrictions in Auckland, according to a published article in Reuters.