The Boston Red Sox Outfielder Hunter Renfroe had the type of performance that Red Sox legends are made of on Wednesday night. 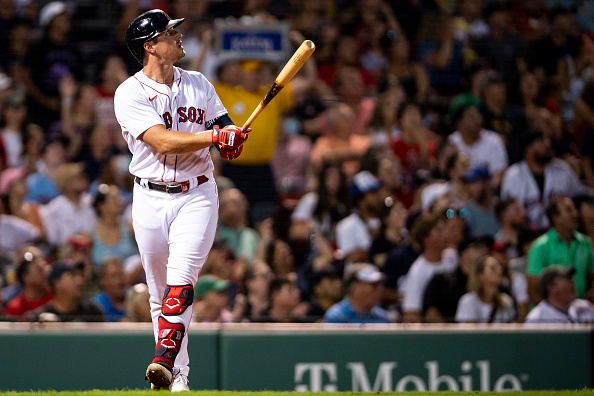 (Photo : Billie Weiss/Boston Red Sox/Getty Images)
Hunter Renfroe #10 of the Boston Red Sox hits a three-run home run during the fourth inning of a game against the Minnesota Twins.

Hunter Renfroe Made an Impressive Inning

In a recently published article in Yahoo Sports, the outfielder for the Boston Red Sox made the throw of the year - and perhaps the decade to help his club beat his former team, the Tampa Bay Rays, 2-1. In one hop, he went from a step in front of the warning track in center to third base. Joey Wendle, the Rays' infielder, couldn't have predicted when his fly ball went past center fielder Danny Santana.

Renfroe's efforts did not end there because he was also the reason the Red Sox were ahead after hitting a two-run homer in the eighth inning. In the fourth inning, he made another amazing throw. These throws are stunning, but it is not so lovely to watch them come from Renfroe for Tampa Bay.

Meanwhile, the 29-year-old has always possessed one of baseball's strongest arms, which was one of the reasons the Red Sox signed him to a one-year, $3 million contract in free agency this summer. Renfroe spent the previous season with the Rays as a platoon player, helping them to the World Series, according to a published sports news in New Haven Register.

How Did They Dominate the 8th and 9th Innings?

With a player on base and two outs in the bottom of the eighth inning and his team down 1-0, the Red Sox right fielder came to the plate. Renfroe hit a go-ahead two-run home run on the first pitch he saw, a 90 mph slider from JT Chargois that he blasted 415 feet into the night sky over the Green Monster.

After a Joey Wendle liner went by him in deep centerfield with two outs in the ninth inning and his team clinging to a 2-1 lead, Renfroe came in to relieve Danny Santana. Renfroe scooped up the ball as Wendle made his way to second base and fired a beautiful strike to third base for the game's final out, according to a published article in Eagle-Tribune.

Nathan Eovaldi, who pitched a gem as the game's starting pitcher, said, "Unbelievable! It's tough to run, stop, catch the ball, plant, throw all the way to third on the money, it was unbelievable," Meanwhile, Renfroe said that he can help the team anytime that they badly need to win.

Other Players Stepped Up During the Game

On the mound, Eovaldi was outstanding, throwing seven shutout innings with eight strikeouts and a season-high 20 whiffs on 98 pitches. Bobby Dalbec's finest glove work of the year was on display in the top of the seventh inning, when he recorded three straight outs before slamming the tag on Wendle to complete Renfroe's outfield assist in the ninth.

The Red Sox hit the ball well, but their hard-liners often found one of the Rays' outfielders, and Tampa Bay continued to put up a fight. The American League's best club shut down Boston's offense for the first seven innings before scoring a run in the top of the eighth inning against Josh Taylor and Garrett Richards to set up the thrilling finale.