Despite having a lengthy relationship with the Lakers, Carmelo Anthony had never imagined himself in purple and gold or become a part of the Los Angeles Lakers until this summer. 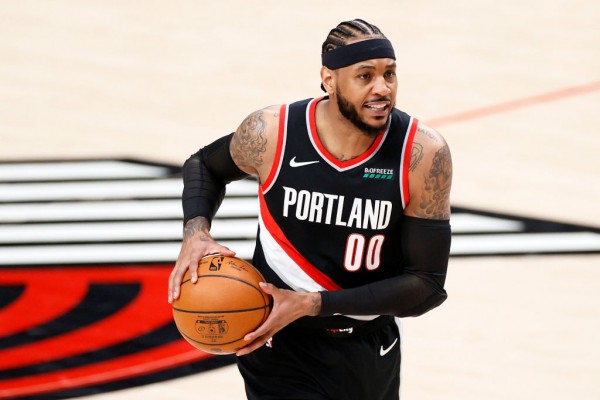 (Photo : Steph Chambers/Getty Images)
Carmelo Anthony will be joining Los Angeles Lakers in the next season.

in a recently published article in Silver Screen and Roll, Carmelo Anthony has been connected to the Lakers more than any other current player in the NBA throughout his career. Anthony has long been a target of several incarnations of Laker's front administrations, dating back to his tenure in Denver, for a variety of reasons.

He also added "But never have I thought that I would be wearing purple and gold. Especially at this point in time of my career, but hey, everything happens for a reason, and I believe that," according to a published sports article in MSN News.

After losing in the first round of the NBA playoffs for the first time in Lebron James' career, the Los Angeles Lakers went into the summer with the goal of restructuring the roster in order to surround LeBron and Anthony Davis with as much talent as possible in order to return to the NBA finals.

The Lakers kicked off the offseason with a bang, acquiring Russell Westbrook from the Washington Wizards. Dwight Howard, Kendrick Nunn, Wayne Ellington, Malik Monk, Trevor Ariza, and Talen Horton-Tucker were all signed, and they re-signed Talen Horton-Tucker.

However, the Lakers made another move this summer that will almost certainly become one of the season's major stories. And there was Carmelo Anthony's signing. With the Los Angeles Lakers, Carmelo Anthony has the opportunity to alter the course of his career, according to a published article in Fansided.

How Carmelo Anthony can Contribute to the Los Angeles Lakers?

Despite the fact that Anthony is beyond his peak, he remains an interesting player who might provide some productivity off the bench for the Lakers. Anthony has done an excellent job of establishing himself as a role player in the NBA after a short and unwelcome absence.

It's not easy to go from being the greatest player on the team and the No. 1 offensive option to being the fourth or fifth best player on the team and an offensive afterthought. Many former star players have failed to pull it off in the past. As a result, several players have decided to retire early. For a time, it seemed like Anthony was in for it. After some time away, something clicked for Anthony, and he's developed into a solid role player over the last two seasons.

Fan Nation reports, the Lakers are hoping he can do the same for them this season. Anthony is coming off a season in which he averaged 13 points per game while shooting 42 percent from the field and 41 percent from beyond the arc. If he can do that off the bench for the Lakers, there's little doubt he'll carve out a significant role for himself next season.