President Kais Saied of Tunisia said that over 460 businessmen or elites stole over $4.8 billion in public funds and offered them a legal deal if they repaid the money. 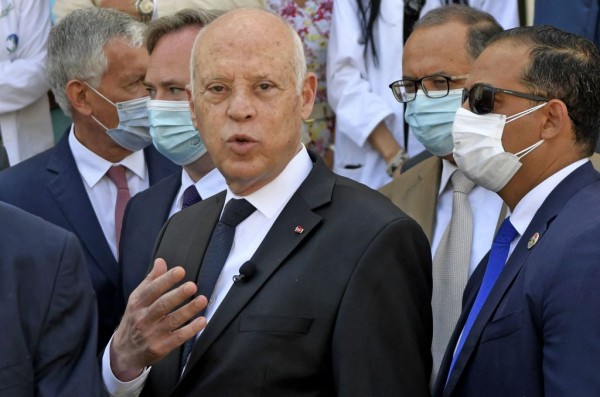 (Photo : FETHI BELAID/AFP via Getty Images)
Tunisia's President Kais Saied speaks with reporters at the headquarters of the central pharmacy in the capital Tunis.

In a recently published article in Middle East Eye, President Saied said that businesses had stolen money via unpaid taxes and fraud, citing a list of 460 individuals prepared by an anti-corruption committee following the 2011 revolution.

In his Facebook live address, Saied offered them the option of facing jail or returning the money to the nation via non-profit investments in hospitals, schools, and infrastructure in impoverished regions. He said that businessmen robbed the people for decades and now is the time to return the funds to them.

Tunisian economic analyst Ezzedine Saiden told national radio station Mosaique.fm that Saied's "penal settlements" would help the Tunisian economy much, and that a probe into the corruption might produce considerably more than Saied's stated 13.5 billion Tunisian dinars, according to a published article in Africa News.

Saied's pledges come after he fired Prime Minister Hichem Mechichi, froze the parliament, and assumed executive powers on Sunday; these were actions that the president's critics and constitutional lawyers have dubbed as a coup. In addition, Saied has assumed the role of the state prosecutor.

While many political parties and constitutional lawyers have criticized Saied's power grab, he has maintained that his actions were legal and in accordance with a constitutional provision for crisis circumstances, according to a published report in ALJAZEERA.

During a meeting Wednesday evening with the president of the employers' association, the head of state criticized the "poor economic decisions" made in previous years in Tunisia, only three days after suspending Parliament's activities for a month and seizing complete executive authority (Utica).

Saied Calls for the Revival of Phosphate Production

The Tunisian President also called for a resurgence of phosphate production, which is one of the country's scarce natural resources. The Gafsa Phosphate Company (CPG), a former economic powerhouse in Tunisia, has seen its output plummet since the 2011 revolution, owing to a lack of investment and recurrent civil upheaval.

Tunisian President Saied wants phosphate to return to its previous activities, and he alluded to the industry's widespread accusations of corruption by mentioning those in the Parliament who cover themselves with parliamentary immunity.

The statement was well-received, according to Tunisian political analyst Mohammed-Dhia Hammami, since corporate elites are unpopular in Tunisia. He said that it is because there have been no arrests or major decisions that give the appearance that he is following through on his pledges. He needed to take action.

How Saied's "penal settlements" would be implemented is unclear. Some businesses, according to Hammami, may attempt to overturn the judgment, resulting in "years" of legal fights. The important element of Saied's action, according to Hammami, is his apparent effort toward reconciliation, which may offer corrupt business leaders from the Ben Ali period a second opportunity.

Meanwhile, the International Monetary Fund has promised to assist Tunisia in dealing with the pandemic's "exceptional socio-economic strains" and restoring its finances to a sustainable level.