By  Neil Pelayre Jun 17, 2021 02:10 AM EDT
COVID-19 delta variant, discovered in India, has already spread to more than 80 nations. The World Health Organization warns the public as the variant continues to mutate and spreads across the world. 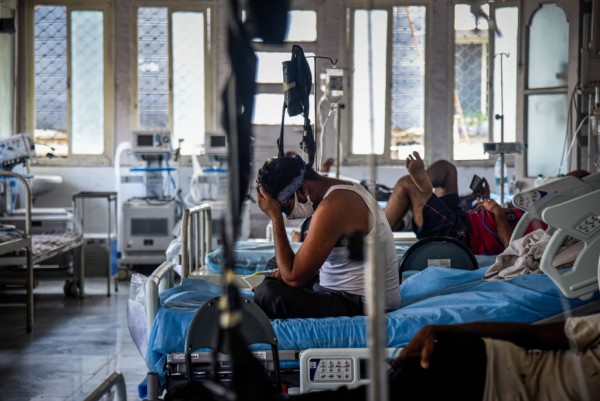 (Photo : Fariha Farooqui/Getty Images)
A patient who has Covid-19 sits on his bed in an ICU ward at the government-run St. George hospital

Maria Van Kerkhove, the WHO's Covid-19 technical lead said that the international health agency is now tracking new reports also about the "Delta Plus." She said, "What I think this means is that there is an additional mutation that has been identified," according to a published report in World News Era.

She also added that they have observed one less mutation or one deletion instead of an extra in some of the delta variations, and they are on the lookout for it. Meanwhile, the delta variant has surpassed its original alpha version as the main strain in the United Kingdom, where it was initially identified last autumn.

What is the New Variant Called Lambda?

On Tuesday, the Centers for Disease Control and Prevention identified the delta variant as the main concern in the United States. In early May, the WHO classified the delta as a variant of concern, according to a published report in News Central.

The lambda version contains several mutations in the spike protein that may affect its transmissibility, but additional research is required to properly understand the changes, according to Van Kerkhove.

Additionally, according to WHO authorities, some studies have discovered that it also produces more severe symptoms, although further study is required to validate those findings. Until today, there is no nationwide study conducted about the Delta variant.

Dr. Anthony Fauci Released a Statement About the Delta Variant

Dr. Anthony Fauci, the president's top medical adviser, warned last week that they cannot allow that to happen in the United States, as he urged for more people to get vaccinated, particularly young adults and children.

Fauci also explained that the Delta variation is more infectious and may be linked with a greater risk of hospitalization than the original "wild type" Covid-19 strain. Fauci emphasized the significance of receiving two doses after NIH tests revealed that, three weeks after administration, just one dose of either vaccination offered just 33 percent effectiveness against the Delta strain.