President Joe Biden said the arrest of former Minneapolis Police Officer Derek Chauvin in the killing of George Floyd "can be a giant move forward" for the country in the battle against systemic racism. But, he noted that "it's not enough." 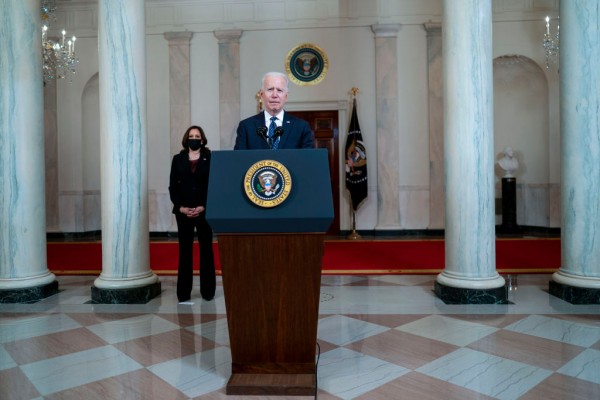 Joe Biden and Vice President Kamala Harris spoke from the White House hours after Chauvin's verdict, stating that the country's job is far from over despite the verdict. Biden and Harris urged Congress to move quickly on police overhaul, including passing a bill named after Floyd, who died last May when Chauvin pressed his knee on Floyd's neck during an arrest.

Beyond that, the president said the nation as a whole must combat racism to transform hearts and minds, as well as laws and policies. "Those words do not perish with him. Those phrases must be said over and over. We do not avert our eyes. We can't just walk away."

Harris, the nation's first Black vice president, said racism prevented the country from upholding its founding promise of liberty and justice for everyone. "It isn't just an issue in Black America or with people of color. She said, "It is a problem that affects every American. It is preventing our country from realizing its full potential."

After calling Floyd's family to inform them of the verdict, Biden addressed the country, saying, "We're all so relieved." Then, he went out of his way to console Floyd's little daughter, Gianna, telling her, "Daddy changed the world."

The jury found Derek Chauvin guilty of two charges of murder and one count of manslaughter after about 10 hours of deliberation over two days. The ruling and its aftermath would put Biden to the test for the rest of time, NBC New York reported.

He also promised to help African Americans who voted for him in massive numbers in last year's election in the aftermath of the nationwide protests that erupted after Floyd's death and reignited a national debate about racism. However, he has long portrayed himself as a supporter of police, dealing with criticism of long-used approaches and training methods and recruiting issues.

After a jury found Derek Chauvin guilty of second-degree unintentional murder, third-degree murder, and second-degree manslaughter, President Joe Biden and Vice President Kamala Harris called George Floyd's family on Wednesday to share their love and sympathy. The president also announced that he, Harris, and senior adviser Cedric Richmond had been viewing the verdict from the White House.

The vice president has encouraged Congress to pass the George Floyd Justice in Policing Act, which would restrict racial discrimination at all levels of law enforcement and the use of chokeholds, carotid holds, and no-knock warrants. It will also encourage the government to create a nationwide police misconduct register and overhaul law enforcement qualified immunity. The House approved the bill in March, but it would need 60 votes to pass in the Senate, where Republicans have voiced their opposition, as per the IBT.

Ben Crump, a civil rights lawyer representing the Floyd family, shared the video and expressed hope that the trial's verdict would prompt reform on the George Floyd Justice in Policing Act. For this reason, Biden said he would fly the family out to Washington, D.C. on Air Force One. At a crucial moment in history, Harris praised the Floyd family as "true leaders," The Hill reported.