Due to increased violence and assault due to the coronavirus pandemic, more Asian Americans are arming themselves for protection.

According to Tim Hensley, general manager of Towers Armory in Toledo, Ohio, the number of Asian customers who have visited his store lately has increased from a couple of people a week to four or five people a day. 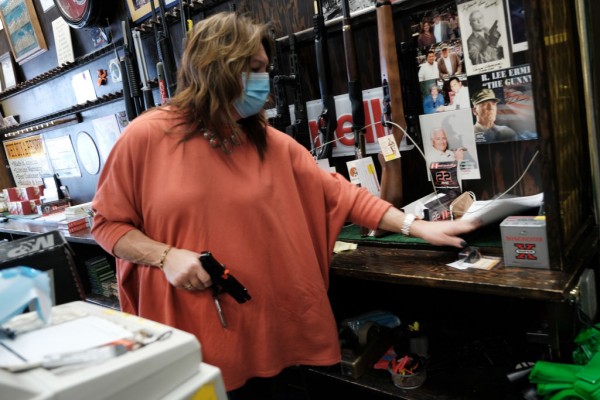 (Photo : Spencer Platt/Getty Images)
Biden Administration To Push New Gun Control Measures After Multiple Mass Shootings JERSEY CITY - MARCH 25: Lisa Caso sells guns at Caso's Gun-A-Rama store on March 25, 2021 in Jersey City, New Jersey. Caso's Gun-A-Rama has had a significant increase in business with lines often out the door as more people buy guns for security and for fear that there will be increased bans on them. In the wake of recent mass shootings, the Biden administration is pushing for the Senate to pass gun legislation already passed by the House. Area gun businesses have seen a rise in sales recently that has even led to a shortage of bullets.

From his shop in an industrial suburb of Oregon, Hensley said that most of them are first-time gun owners who felt compelled to take matters into their own hands to fight for their safety.

According to the National Shooting Sports Foundation, an industry trade body, more than 8.4 million individuals purchased guns for the first time last year, with 21 million background checks performed on gun sales. In the first half of 2020, Asian men make up 3.1 percent of all consumers at gun stores, while Asian women made up 0.7 percent, said the foundation. Asians make up 5.7 percent of the population, noted the group.

In 2020, white men accounted for 55.8 percent of gun owners, while white women accounted for 16.6 percent. However, several gun shops painted a completely different image, as per Global China Daily.

Following a series of high-profile mass shootings, including one on Thursday at an Indianapolis FedEx facility that killed eight people and another on Sunday in Texas, gun violence is being scrutinized, and guns are again in high demand. According to Canon, nationwide protests on political topics are boosting sales.

President Joe Biden has acted by instructing the Department of Justice to draft legislation to reduce the availability of "ghost guns," or firearms made from parts purchased online or kits. A gun that has to be assembled is not deemed completed, Sharon Herald reported. As a result, it lacks serial numbers, which makes it possible to track down the weapons.

Biden has stated that he wants gun-making kits and components to be treated as handguns, along with serial numbers. Gun reform advocates are also pushing for a reduction in magazine size, which can reach 100 rounds in some cases. One thing is clear: whether motivated by fears of a potential federal government crackdown on guns or fears of national unrest, sales of firearms and ammunition are increasing, as are costs, likely due to a windfall from COVID-19 stimulus checks to prospective buyers.

Asian Americans seek safety against a surge in violence

Asian Americans have dealt with the surge of anti-Asian attacks in various ways over the last year. Some people are avoiding going out in public. Others are putting together service ambassador services or senior escorts.

However, a small group of people in southern California considers a very different course of action: acquiring handguns for self-defense. A dozen people assembled at the Marshall Security Training Academy & Range in Compton on Saturday morning to practice how to hold and fire guns, as per the NPR.

The rise in violence has sparked a national debate about the roots of anti-Asian racism and how to combat it. A hearing on the increase in hate crimes against Asian Americans was convened by the U.S. House Judiciary Subcommittee on the Constitution, Civil Rights, and Civil Liberties three weeks ago.