China is attempting to brainwash Christians by keeping them in mobile "transformation facilities," the latest report reveals. 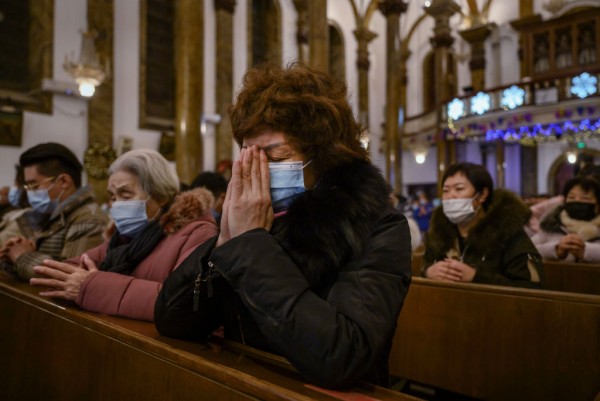 (Photo: Kevin Frayer/Getty Images)
China Daily Life Amid Global Pandemic BEIJING, CHINA - DECEMBER 24: Chinese Christians pray during a Christmas Mass at a Catholic Church on December 24, 2020, in Beijing, China. Christian Churches in the Chinese capital held Christmas services with limited attendance and worshippers required to wear masks and present valid proof of health via mobile phone through a government app to show they are COVID-19 free.

Last week, Radio Free Asia broadcast reported from a man who went by the pseudonym Li Yuese, who said he was beaten for nearly ten months in a windowless room. Authorities raided Li's church group in 2018, he said, and he was detained, Fox News reported. "There were no lights, no ventilation, and no outside time," Li said. "I was only given two meals a day, delivered to my room by a designated person."

Authorities threaten, insult, and threaten you," he said. Officials from the United Front are often anonymous and primarily dressed in plain clothes. The cops are insensitive to this. If you refuse, Li says, "you will be seen as having a bad attitude. They will lock you in detention and continue to beat you."

He said that his fellow prisoners had been released on parole and had participated in church-related activities. Both Protestants and Catholics were influenced by the suppression, with priests disappearing for "five, six, perhaps ten years at a time," he said.

The report released last week was the latest to shed light on suspected Chinese government violations. Former prisoners alleged heinous crimes such as raping women with electrocuting instruments, according to a BBC report on the Uyghurs.

According to RFA, the CCP strictly regulates all forms of religious worship among its citizens. The party considers Christianity to be a threatening foreign import, and the party documents caution against "infiltration of Western imperialist powers" by religion.

Another Christian who asked to remain anonymous said that similar services are used by members of China's underground Catholic church worldwide. According to a prosecutor called Zhang, bishops and priests vanished after being arrested, often for ten years at a time.

"Some were sent back home after five or six years, and it was from their accounts that people heard about the brainwashing centers," Zhang said. The RFA said China has an estimated 68 million Protestants, 23 million of whom worship in state-affiliated churches under the Three-Self Patriotic Association's aegis, and nine million Catholics. The bulk of whom are members of state-sponsored organizations, as per Big News Network.

China also started a drive to tighten controls on five forms of social organizations that the government considers unconstitutional, including house churches not affiliated with the Three-Self Patriotic Association, which the Chinese Communist Party funds. According to the Christian Post, the campaign will also target organizations that continue to operate after having their registration revoked, said the ministry.

The five social organizations currently deemed illegal, the persecution monitoring group International Christian Concern said. These include those suspected by the regime of committing fraud or participating in economic, cultural, or charitable activities in the interest of enforcing national strategies.

The movement has now been launched in provinces such as Sichuan. According to RFA, Sichuan's Department of Civil Affairs released a list of 84 so-called "Illegal Social Organizations" on March 25. Many Buddhist and Christian organizations, including the Early Rain Covenant Church, have been unable to meet in person after the communist regime shut it down in 2018.

"In the eyes of the Chinese government, any religious organization who refuses to adhere to the CCP, or even charity groups, are treated as 'illegal organizations.' Because the government is afraid that these civil groups will become a force that overthrows them," Father Francis Liu of the Chinese Christian Fellowship of Righteousness told RFA.

China is ranked 17th on Open Doors' World Watch List of the 50 countries where Christians are persecuted the most. The Pew Research Center reported in November 2020 that religious restrictions in China had reached an all-time high. China appeared to have "the highest score on the Government Restrictions Index out of all 198 countries and territories studied," researchers found.

WHO Report From China Claims COVID-19 Likely Originates From Animals