The Philippines has warned Beijing that if Chinese warships thought to be part of a "maritime army" do not leave contested South China Sea zones, it will face a torrent of diplomatic demonstrations, worsening the bilateral spat. 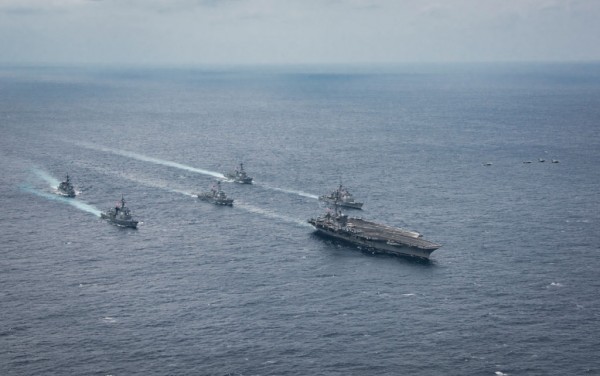 On Monday, aides to Philippine President Rodrigo Duterte blasted China for what they described as territorial incursions by hundreds of its ships, which his legal counsel cautioned could break relations and lead to "unwanted hostilities."

According to a published report in Reuters, Salvador Panelo, Duterte's counsel, said the continued existence of boats was an unnecessary blot on relations that threatened "unwanted hostilities that both countries would rather not seek," in some of the strongest terms yet from Duterte's camp regarding China's actions in the South China Sea.

Panelo said "We can negotiate on matters of mutual concern and benefit, but make no mistake about it - our sovereignty is non-negotiable," Meanwhile, Duterte's spokesperson, Harry Roque, reiterated the sentiment, saying at a press conference that they would not give up a single inch of the country's national frontier or exclusive economic zone.

Japan's Dispute Over Chinese Ships in East China Sea Near Senkakus Will Get U.S. Support

Department of Foreign Affairs said in a statement on Monday "For every day of delay, the Republic of the Philippines will lodge a diplomatic protest," It also reiterated its demand that the Chinese warships depart Whitsun Reef immediately, arguing that it is part of the Philippines' exclusive economic zone.

On the other hand, China said on April 3 that the waters had been a "common fishing ground for Chinese fishermen for many years" and that it was "absolutely natural" for ships to "take refuge near the reef during rough sea conditions," according to a recently published article in Bloomberg.

Furthermore, China vowed to keep the peace and expressed the expectation that Philippine officials would "ignore any unprofessional comments that might further fan irrational feelings," However, a request for comment on the new Philippine declaration was not immediately responded to by the Chinese Foreign Ministry.

Philippine Defense Secretary Delfin Lorenzana said on Sunday China's presence along the reef demonstrates Beijing's desire to claim more contested territory. He also said that China has done this in other disputed regions, such as Scarborough Shoal, and that it is blatantly infringing on Philippine sovereignty.

Lorenzana was responding to a statement released by China's embassy in Manila on Saturday, which identified the waters surrounding the Whitsun Reef, where hundreds of Chinese vessels were spotted early last month, as "common fishing grounds" and "part of China's Nansha Islands," according to Philippine Star.

Moreover, following the Chinese Embassy's argument that Whitsun Reef is part of China's jurisdiction, Philippine Foreign Affairs Secretary Teodoro Locsin said on Sunday that he is "considering a demarche." On Twitter, he also said that "swarming accomplishes little."

Under President Rodrigo Duterte, the Philippines has established friendly relations with China in recent years while retaining its alliance with the United States.