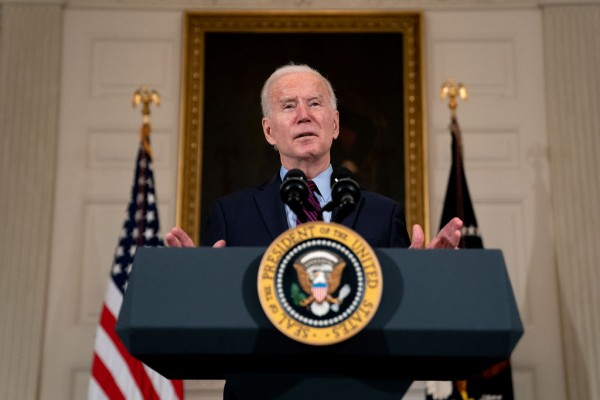 (Photo : Stefani Reynolds-Pool/Getty Images)
President Biden Delivers Remarks On The Economy And Need For American Rescue Plan WASHINGTON, DC - FEBRUARY 05: U.S. President Joe Biden delivers remarks on the national economy and the need for his administration's proposed $1.9 trillion coronavirus relief legislation in the State Dining Room at the White House on February 05, 2021 in Washington, DC. Biden hosted lawmakers from both parties at the White House this week in an effort to push his pandemic relief plan forward.

The bill aims to spend some of the funds on improving broadband internet service. According to a fact sheet published by the White House on Wednesday, the administration's target is to provide all Americans with accessible and efficient high-speed internet.

During a conversation with reporters on Tuesday evening, before the bill was publicly released, a senior administration official referred to the internet as the "electricity of the 21st century" clarified some of the plan's details. The official told reporters that "this initiative will accomplish the target of universal access to affordable broadband in this decade," as per Newsweek via MSN.

As the new investments are made over eight years, the bill as a whole is projected to generate "millions" of jobs, the official continued. The planned expenditures would be financed by raising the corporate tax rate to 28% if the bill passes.

According to the fact sheet, the planned $100 billion broadband investment would create broadband networks in places where it does not operate, enabling the nation to achieve 100% high-speed broadband coverage finally. This investment would also aim to lower internet prices by encouraging "price transparency and competitiveness" among internet service providers.

On Wednesday, the Democratic leaders of the Senate and House of Representatives issued statements endorsing the American Jobs Plan. Senate Majority Leader Chuck Schumer based his speech on the plan's transportation aspect, highlighting proposals to redevelop a highway in his state.

House Speaker Nancy Pelosi lauded the bill in a tweet, highlighting many parts of it, including its "significant" investment strategy for internet access. Pelosi finished her statement by expressing confidence that both Democrats and Republicans would support the measure, Politico reported.

This is one of the thornier topics that Biden supports in the infrastructure plans, making bipartisanship on Capitol Hill more challenging to pursue without intensive negotiation. Broadband companies have traditionally opposed government intervention in their pricing policies. One of the concerns posed by the telecom industry and Republicans during negotiations over net neutrality is that Democrats will want to control broadband internet speeds, something many Democrats have said they have little interest in doing.

The White House "risks taking a serious wrong turn in discarding decades of good policies by proposing that the government is better positioned than private-sector technologists to develop and run the internet," said Michael Powell, president of the industry trade organization NCTA - The Internet & Television Association.

Although the government has a role in bringing networks to underserved communities and assisting low-income households in affording them, Powell believes it is incorrect to prioritize government-owned networks or micromanage private networks, including the false suggestion the government can control prices.

The Federal Communications Commission said the number of users without access to internet speeds of at least 25/3 Mbps has dropped to about 14.5 million by the end of 2019. In a letter to the White House earlier this month, a coalition of senators shared their disappointment with the new high-speed standard of 25 megabits per second and upload rates of up to 3 megabits. Senators urged support for a target of 100 megabits per second, as per Reuters.