Former President Donald Trump revealed that he left a 'couple' page letter written 'the heart' for Joe Biden in the Oval Office as he mocked his successor's border policies. 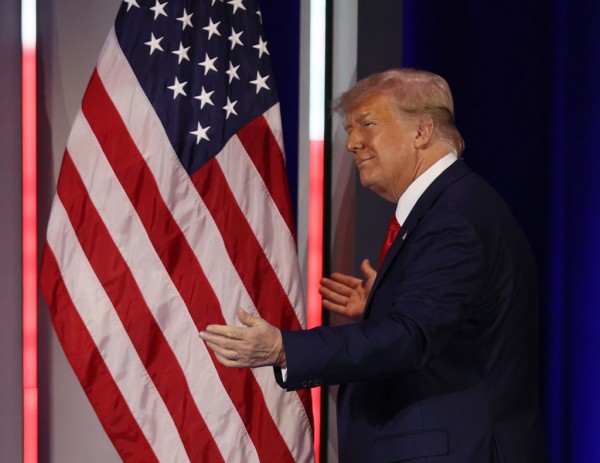 In an interview with Lisa Boothe for her podcast, Donal Trump said he basically wished Joe Biden 'luck'. It's traditional for a departing president to leave a letter to his successor. Still, considering the tensed election between Trump and Biden, there were doubts about whether Trump would do so. However, when Biden reached the Oval Office on January 20th, he found a letter on the Resolute Desk.

At the time, Biden said, "The president sent a very generous letter. Because it was personal, I won't say anything until I speak with him." Meanwhile, Trump said, it was "a couple of pages long and it was from the heart because I want to see him succeed."

He wouldn't reveal what he wrote in detail. Biden had said that he would not disclose the letter's contents until he speaks with Trump, although it is unknown when the two men last spoke. In October 2020, it was expected to be the final presidential debate.

According to Daily Mail, when Boothe asked the former President what he wrote, he answered, "I don't want to say. That's, you know, perhaps up to him (Joe Biden) and I guess he said he wouldn't do it without my approval." The letter will finally be made available since all notes that outgoing presidents leave with their successors are archived and sent to the National Archives and Records Administration under the Presidential Records Act.

Trump repeated several of his old allegations in the almost 60-minute podcast interview, including his false assertion that he won the 2020 election, that he was the target of a 'witch hunt' by special counsel Robert Mueller, and that Republicans, including his own Vice President Mike Pence, did not help his bid to reverse the election outcome illegally. Trump also said that he never gave in to Biden's requests.

And though Trump wished Biden well, he slammed his successor for his immigration policy and inability to build the border wall. Past leaders have a habit of not criticizing the current commander in chief. During their tenure in office, Barack Obama and George W. Bush largely avoided commenting on Trump.

On the border, Trump told Biden that he should 'finish the wall.' He also said that his long-promised border wall is almost over. According to US Customs and Border Protection (CBP) records, the Trump administration constructed 452 miles of wall along the 1,954-mile US-Mexico border.

However, only 80 miles of the new wall had been constructed. The overwhelming majority of the barriers built by the Trump administration replaced barriers by previous administrations. Trump has reaffirmed his claim that 'dangerous criminals' are crossing the border.

Trump's criticism came as the Biden administration tries to address the border crisis. As of Saturday, the number of unaccompanied migrant children in US custody had reached 15,000 people. Agents are said to have kept over 1,000 children for more than ten days.

Axios obtained new images that show the children living in crowded conditions, with many of them lying on the floor. Republicans have mocked Biden for repealing some of Trump's hardline policies, which they say have resulted in an influx of migrants at the border. During his campaign, Biden said that he would introduce "more humane" border measures, which others have interpreted as a sign that crossing the border would be simpler.

Even though he insists Biden is "bought and paid for" by China, former President Donald Trump claims to have sent him a lengthy letter "from the heart" before leaving the White House. Because of his son Hunter Biden's business interests in China, Trump said that China would "own" the US if Biden won during the campaign last year.

The first son also held 10% of an investment fund operated by Chinese state-owned companies last month. Hunter Biden joined his father on board Air Force Two for a trip to Beijing in December 2013, and the fund was formed 12 days later.

In a 2017 email retrieved from Hunter Biden's hard drive, a 10% set-aside for "the big guy" was identified as part of a potential transaction involving China's largest private energy firm. While the sale fell through, Tony Bobulinski, a former Hunter Biden business associate, described the elder Biden as the "big guy," NY Post reported.