President Joe Biden and Vice President Kamala Harris made their first joint trip together and urged the world to stand up to racism and xenophobia. The President became emotional at times as he discussed an area shaken by the deaths of eight people in a mass shooting targeting Asian spas.

Biden, Harris urged the world to stand against racism and xenophobia 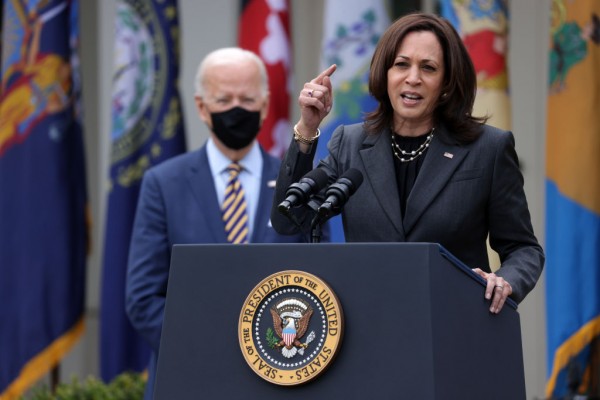 "There are clearly some core values of conviction that should bind us together as Americans," Biden said at Emory University. "One of them should be standing together against hate, against racism."

Biden's visit did little to soothe the grief and anger many Atlanta residents are still grappling with three days after suspect Robert Aaron Long's alleged rampage. On Friday, officials named four more victims, and local leaders gathered to decry the rise in violence against Asian Americans.

The Washington Post received new surveillance footage on Friday that revealed new information about the suspect's conduct just before the shooting. Long entered Young's Asian Massage an hour before gunshots were heard, according to the recording. It's not clear what he did inside.

Biden and Harris have spoken with Asian Americans, Pacific Islander community advocates, and city officials for over an hour. Harris is the first Asian-American vice president; her parents came to America from India and Jamaica. The president commented on the benefits of the $1.9 trillion stimulus bill that Biden signed into law last week during his comments, originally intended to be the presidential trip subject.

Outrage over the killings went well beyond Atlanta, with donations flowing in from all over the world - and beyond - to GoFundMe projects set up to benefit the victims' families. One, which was started on Thursday by the son of one of the Atlanta spa victims, had raised over $1.6 million by Friday evening.

President Joe Biden arrived in Georgia for a series of meetings, including a speech at Emory University and a meeting with Georgia Asian-American officials, following a series of missteps on his way up to Air Force One on Friday.

President Biden stumbled as he scaled Air Force One's stairs, managing to trip, get up, and then trip again. He tried for a moment to get up the second time before succeeding and turning to wave at the top of the steps before rushing inside.

"As you might be aware, it is quite windy outside, in fact, it is extremely windy. Coming up the stairs, I almost fell," Biden said. While briefing reporters on the plane to Atlanta, deputy press secretary Karine Jean-Pierre said. "All is fine with him."

Biden's meeting with Georgia Asian-American officials came just days after a mass shooting at several massage parlors and spas in the metro Atlanta area killed several Asian-Americans. It also comes when racism against Asian-Americans is on the rise in the United States, as per CBS46.

Since the pandemic started a year ago, lawmakers such as representatives Judy Chu and Grace Meng have called attention to acts of abuse against Asian Americans worldwide, encouraged Republicans to refrain from hateful language, and urged their peers to pass legislation to fix the problem. Rep. Doris Matsui, D-Calif., who grew up in a Japanese American internment camp, said her family had lived with the effects of normalizing anti-Asian racism. She said that their government had betrayed ordinary people due to a "dangerous cycle of inequality," USA Today reported.