Meghan Markle and Prince Harry spoke their minds for the first time. The pair, who are expecting their second child, had a tell-all with Oprah Winfrey for their first joint interview since their royal exit. The interview was aired on Sunday. 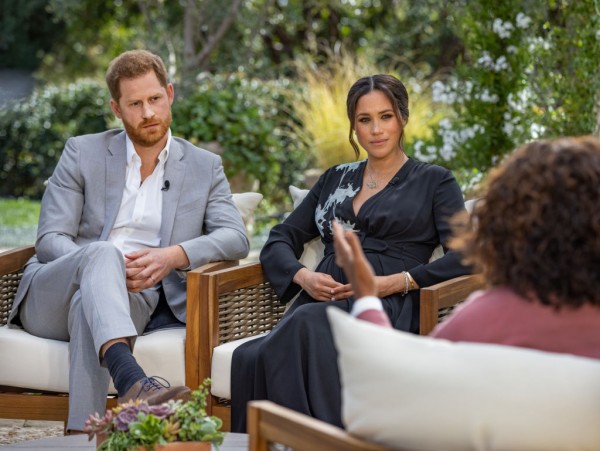 We knew the tell-all would be explosive based on the few teasers we'd already seen. Indeed, Meghan and Harry didn't hold anything back. Meghan has been subjected to an incredible amount of criticism and overt racism since she first met Harry in 2016, so this opportunity was long overdue. Hearing Meghan and Harry's side of the story was extremely refreshing, and our only hope is that the palace and the British press were paying attention.

Following their 12-month trial period, the Duke and Duchess of Sussex announced in February that they would not be returning as senior members of the British royal family, PopSugar via Yahoo reported. As a result, Queen Elizabeth II removed them from honorary military appointments and royal patronages, but their titles remained.

Since then, the tabloids have become hell-bent on smearing Meghan's reputation, most famously with accusations of coercion by a former counselor. But if there's one thing we gathered from Harry and Meghan's interview, it's that the palace and the British press have no idea how to deal with a self-assured woman who speaks her mind and isn't afraid to test the status quo.

Here are the 5 biggest bombshells Meghan Markle and Prince Harry revealed during the CBS primetime special "Oprah with Meghan and Harry:"

Princess Kate made Meghan cry, not the other way around

According to Parade, though it was widely reported months after Meghan and Harry's royal wedding that Markle made Kate Middleton sob during a dress fitting for Princess Charlotte, Meghan says that Kate was the one who made her cry, that she apologized and that it was all over. Meghan, on the other hand, was upset when rumors circulated that she was mean to Kate.

Markle had suicidal thoughts after she joined the royal family

After marrying Prince Harry and settling into royal life, Markle said she considered suicide. Her mental health suffered as a result of the harsh public attention she received from the British press. The Duchess of Sussex had disclosed that she had talked to a senior official of the royal institution when she was suffering, who told her she couldn't get treatment with her mental health because it would reflect adversely on the royal family.

Markle said she sought support from "The Institution," a network of Palace workers, to go elsewhere for mental health care, but they declined to help her or allow her to get outside help. She hadn't seen her driver's license or passport since her wedding day, and she had no idea where to turn. Since no one else knew, she eventually confided in one of Princess Diana's closest friends.

One of The Firm's purposes in sitting down with Winfrey, according to Markle, was to spread rumors about her and Prince Harry. "Ever since Harry and I started dating, everyone in my life was told to always say 'no comment,'" she recalled, adding that she was told she would be safe. "It wasn't until after we got married and things began to get worse that I knew I wasn't being shielded, but that they were able to lie to defend other family members but not to say the truth to protect me and my husband."

Meghan Markle learned how to curtsy

Meghan Markle revealed that the first time she met the Queen, there was not a huge formality. She added that she and Prince Harry went to lunch at Royal Lodge, where Prince Andrew and Fergie live and where Princess Eugenie and Princess Beatrice often visit.

When Harry asked Markle if she knew how to curtsy, she replied that she just knew how to do it outside, not inside. "That was the first moment that the penny dropped," Markle said. Outside the house, she practiced curtsying, remembering that a deep curtsy is a sign of respect.

Before marrying Harry, Markle assured Winfrey that she didn't know anything about the royal family, as per the Insider. The actress from "Suits" went on to say that she never romanticized the royal lifestyle but just pictured it as many Americans might. Markle also announced that she and Prince Harry married three days before their televised royal wedding in 2018 in their backyard. According to the duchess, they did so because they wanted to get "back to basics" and have a time just for the two of them. After all, the broadcast wedding was all for everyone else, as Markle put it.