President Joe Biden's stimulus bill could be delayed due to outrage over $1,400 checks for undocumented immigrants' households. The Republican Study Committee wrote a three-page guide detailing the fight against the enormous $1.9 trillion package.

Stimulus bill could be delayed 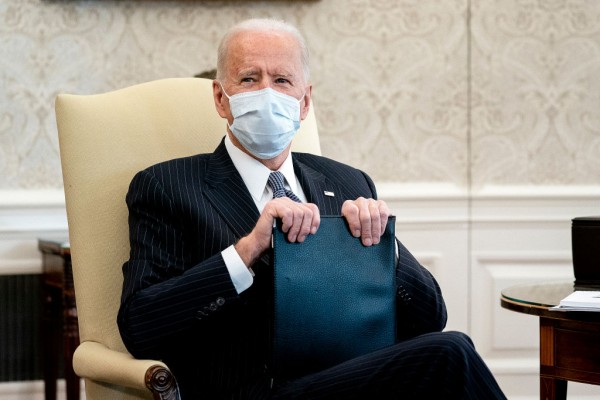 (Photo : Stefani Reynolds-Pool/Getty Images)
WASHINGTON, DC - FEBRUARY 03: U.S. President Joe Biden meets with Democratic senators to discuss his $1.9 trillion American Rescue Plan in the Oval Office at the White House on February 03, 2021 in Washington, DC. In an effort to generate bipartisan support for his plan, Biden met with Republican senators a day earlier to discuss his COVID-19 relief plan, which Democrats are working to push through Congress with or without the GOP.

Included in this list are reports that $1,400 stimulus checks are going to mixed-status families of undocumented immigrants. The memo pointed conservatives to what they believe are "all the left-wing items Democrats are hoping the public won't find about."

Other arguments include allowing Paycheck Protection Program (PPP) checks to be received by Planned Parenthood, primarily intended for small businesses. Another is that almost $600 million will be provided for extra emergency paid parental leave for federal employees and U.S. Postal Service workers.

Representative Jim Banks made the point that taxpayers need to know what is in the huge aid package. Banks told Fox News that the RSC leads conservatives inside and outside the Beltway to this so-called 'relief package.' "The more we learn about it, the worse it sounds," he added.

On Monday, the House Budget Committee approved Biden's stimulus bill with a vote of 19-16. According to The Sun, the House of Representatives expected to pass the bill later this week.

Read also: Before Assuming the $15 Minimum Wage Hike, Here's Everything to Understand With the Debate

Biden: Another $1,400 stimulus checks will be coming

On Friday, the stimulus package was rolled out and delivered to the House, which included a broader law that will bring more funding for vaccination and an estimated $400 per week in federal unemployment benefits. On Twitter, President Joe Biden said that the next round of stimulus checks should be counted on top of the smaller $600 sent out at the start of the year.

"We committed to you, Democrat and Republican, a $2,000 stimulus check. Another $1,400 will be coming," the President added. Once the stimulus bill passes the House of Representatives, Senate Democrats are set on immediately moving the bill to vote without going to various Senate committees that would sign off first.

On Friday, Majority Leader Chuck Schumer told members that the Senate is on track to send a $1.9 trillion stimulus package to the President's table before March 14, the Unemployment Insurance benefits' expiration date. Schumer claimed that leaders would meet the deadline.

Biden will sign the bill just before March 14 if Democrats are willing to sign the bill quickly in both Congress houses, ensuring Americans will get the check before the end of March. On March 14, if relief checks pass through Congress and a stimulus plan is signed into law two days later, CNET noted that the first direct deposit checks are scheduled to begin during the week of March 22.