Why Couldn't Australians Travel in the 2021 Holiday Despite COVID-19 Vaccine Rollout?

Australians will be restricted from traveling abroad for a holiday in 2021, despite the launch of the COVID-19 vaccine program.

Australians would not be authorized to travel abroad 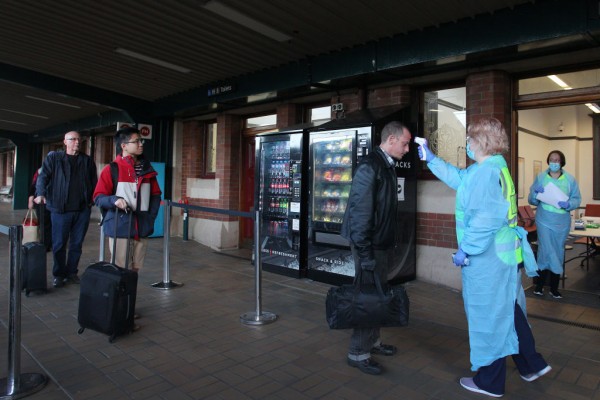 (Photo : Lisa Maree Williams/Getty Images)
SYDNEY, AUSTRALIA - JULY 03: A nurse takes the temperature of an arriving rail passenger from Melbourne at Central Station on July 03, 2020 in Sydney, Australia. The NSW state government are considering road checkpoints and extra screening at Sydney Airport to keep travellers from Melbourne's COVID-19 hotspot areas out of the state. From today, Victorians from the 10 Melbourne COVID-19 hotspot postcode areas are banned from coming to New South Wales and could face fines up to $11,000 or sent to jail for six months if they attempt to enter the state.

Hubs have already been set up to deliver the Pfizer vaccine in every state and territory, with health and border force personnel and elderly care patients being the first to receive the shot on Monday. Senior cabinet ministers have downplayed the possibility of Australians being allowed to go abroad for a holiday this year, despite the vaccination having a 95% effectiveness score.

Finance Minister Simon Birmingham was reluctant to announce the state border closures' end, Daily Mail reported. Birmingham told Sky News interviewer Peter Stefanovic on Monday, "We hope that there aren't virus outbreaks. We have to deal with the reality that that could happen."

Nonetheless, Senator Birmingham, whose wife Courtney Morcombe is South Australian Liberal Prime Minister Steven Marshall's chief of staff, hoped that COVID-19 vaccines would end the restriction of state borders to avoid the spread of the virus. The Senator added that there would be talks regarding the changes in dealing with COVID-19 once they see all vulnerable and older Australians and those at high risk become vaccinated.

Meanwhile, Health Minister Greg Hunt said Australians would not be authorized to travel abroad until there were no more local COVID-19 deaths. On Sunday, Greg told ABC's Insiders program that their first goal is 'protection.'

"What we see is with both the two initial vaccines, the AstraZeneca and the Pfizer vaccine, the international evidence is that the safety impact for prevention of severe illness, hospitalization, death has been determined to be up to 100%."

On Monday, Hunt also declared that Australian travelers would still be required to quarantine in a hotel, even if they received COVID-19 vaccines abroad. The Pfizer vaccine is reserved for border force workers, frontline healthcare workers, and elderly Australians.

Last week, the AstraZeneca COVID-19 vaccine, which has 62% efficacy, received Therapeutic Goods Administration approval and is set to be administered from March to Australians younger than 65. Prime Minister Scott Morrison was the second Australian to receive the Pfizer vaccine on Sunday.

Could Australia open for vaccinated tourists?

Australia, which has followed a "zero-COVID" campaign for a year, could be available to foreign visitors by 2022 but only to those who have been vaccinated. Prime Minister Scott Morrison told reporters: "I think it's a reasonable expectation that as time passes on, you should rightly expect change to happen and how we control the virus as the vaccination rolls out worldwide, including Australia."

According to Independent via MSN, Morrison said that airlines will be closely involved with vaccine passport plans and that the type of COVID-19 vaccine could be crucial. Vaccinations start on Monday in the Australian state of New South Wales.

Foreign visitors are currently barred from Australia, and in response to COVID-19 outbreaks, there have been several border closures between nations. A hotel quarantine was launched on March 28, 2020, for returning residents.

Comments from the prime minister followed calls from Tourism Australia's managing director, Phillipa Harrison, that the country should learn to deal with the coronavirus. She said at a "State of the Nation" travel conference at the Sydney Opera House: "We will only open if we accept that COVID-19 is going to be in this community."

Australia's one-way travel with New Zealand gets back

On Saturday, Australia's Chief Medical Officer, Professor Paul Kelly, advised that 'green zone' flights from New Zealand to Australia could resume yesterday, with a few entry conditions attached. All passengers traveling on a green zone flight that has been in Auckland for some time within the last 14 days, except the airport for flying, are required to provide proof of a negative PCR test performed within 72 hours of their scheduled departure at check-in.

Routine pre-departure and arrival checking will proceed, and it is recommended that travelers planning to fly domestically to Australia check all existing restrictions in their final destination state. These requirements will extend until March 1, 2021. Professor Kelly claimed that the latest COVID-19 cases found in New Zealand posed a low risk of spreading to Australia, as per Travel Weekly.