Over the next month, Democrats are on track to approve $1.9 trillion in stimulus spending. Months after Congress approved a $900 billion relief package in December, this will be another significant boost of federal aid. 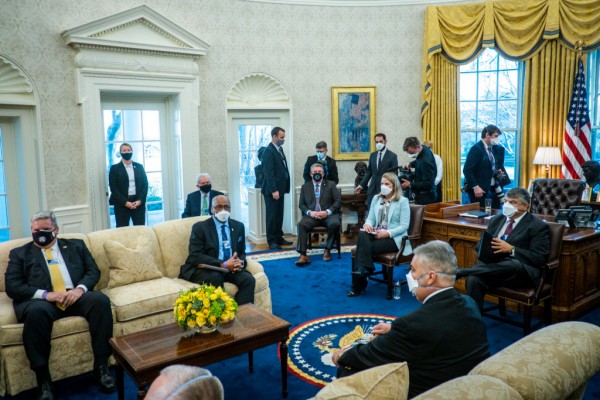 Democrats show few signs of pressing the breaks on government spending anytime soon. Likewise, President Joe Biden says he will force his foot on the accelerator and shake off the rising federal debt. On Tuesday, Biden said during a CNN town hall, "To grow the economy a year or two, three, and four down the line, we can't spend too much. Now is the time we should be spending. Now is the time to go big."

For Democrats, it's a remarkable break a decade after the Great Recession, according to Business Insider. Faced with the worst economic crisis in decades, in February 2009, President Barack Obama enacted an $800 billion stimulus plan. Most economists and Democrats now argue that resolving the fallout of the financial crash has been insufficient.

During President Donald Trump's term, previous attempts in Congress on infrastructure reform failed. The Democrats are now in the early stages of a widespread campaign that could cover housing, climate change, and energy. They feel encouraged by the Federal Reserve pledging for the near term to keep interest rates down.

In an interview, Beyer said, "I think the number one priority for the Congress and White House will be to build the climate initiatives we've so much wanted into an infrastructure bill."

The massive blackouts triggered by an Arctic winter storm in Texas may add fuel to Democrats advocating a big plan to revamp the country's infrastructure. Some senior Democrats are beginning to call for wide-ranging reforms on the wealthy and big corporations that come with tax hikes.

Will more stimulus spending come after the $1.9 trillion bill?

The Washington Post claimed this week that negotiations on a $3 trillion bill had already started, which will include Biden's previously detailed infrastructure proposals, restoration of production, and renewable energy. White House Press Secretary Jen Psaki said on Thursday that there are continuing talks about potential future agenda items when asked if a $3 trillion plan will replace the $1.9 trillion relief bill, but no concrete decisions have been taken.

Three individuals familiar with the matter told The Post that with the second bill, which would come on top of a possible $1.9 trillion to $4 trillion stimulus spending by the previous administration, the $3 trillion figure was being tossed around. Spending estimates are said to be very preliminary, though. However, some government officials are less concerned about growing debt levels and more concerned about bringing the U.S. economy and American families back on their feet, as per Fox Business on MSN.

Read also: Third Stimulus Checks: High Earners May Not Be Included in the Third Round