Third Stimulus Checks: High Earners May Not Be Included in the Third Round

In just over a month, Americans would get a third round of stimulus checks worth $1,400, while higher earners might not get any checks at all. In the latter part of March, stimulus checks could be sent out to taxpayers following President Joe Biden's push to "go big" on relief payments.

Third stimulus checks would arrive after a month 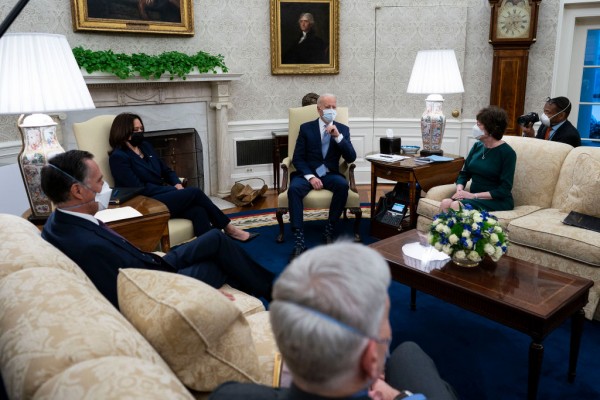 If Biden's $1.9 trillion aid package goes as expected on March 12, stimulus checks pass Congress, and two days later, on March 14, a stimulus bill gets signed into law, taxpayers can expect the first form of payments to be sent shortly.

CNET provided several possible dates in which eligible Americans would receive their stimulus checks. The earliest deposit checks could be sent out on a week of March 22, the news outlet says.

If the stimulus checks pass through Congress on March 22, it would likely become law on Tuesday, March 23. Then, the first batch of direct deposit checks would be distributed on the week of March 29, followed by the first paper checks to be sent out a week later.

Read also: Third Stimulus Checks: Are You One of the Eligible Americans to Receive It, and When?

Talks on COVID-19 relief aid could be postponed

It was recently announced that due to the stumbling block in Biden's aid package, the initial $1,400 stimulus checks could be further postponed. The bill contains a measure to increase the federal minimum wage to $15 an hour and another round of checks for qualifying Americans.

Members of Congress have stated that they are willing to re-focus on Biden's stimulus package now that former President Donald Trump's second impeachment trial has ended in acquittal. But when it comes to gaining Republican support for the package, the minimum wage hike may spell trouble.

A few Democrats have even indicated that they disagree that the proposal is not part of a COVID-19 relief program. Meanwhile, President Joe Biden defended his proposed budget plan and $1,400 stimulus checks in the next round - saying "now is the time to go big."

During a speech at CNN town hall on Tuesday, the President said that he was not reducing the stimulus payments included in his $1.9 trillion relief program. Previously, he was blasted over a $1,400 stimulus checks delay despite promising to "immediately" give out $2,000 payments.

The relief will come with Democrats in charge of the House and Senate, and it will come soon with the Trump impeachment trial now over. This will be the latest, after delivering two rounds of stimulus checks from the Trump administration. Congress is currently working out the new stimulus bill terminology, as per BGR on MSN.

Read also: Sanders: It Is Bad Politics That Those Who Got Their Stimulus Check From Trump Will Not Get Them From Biden

High earners won't get stimulus checks at all

Meanwhile, for any dependent, the new White House plan would pay $1,400, meaning a family of four could collect $5,600, $2,800 for two $1,400 checks from the parents, and an extra $2,800 for the two dependents. BGR previously noted that the latest forecast for stimulus checks would begin arriving in March at some point.

Another argument in the new plan is this time around; it looks like a significant shift is coming for higher-earners. Higher earners, especially if they have dependents, may still expect a partial payout with the previous stimulus checks. But the Biden administration appears to try to slam the door firmly shut this time around, meaning that if a higher earner hits the upper tax cap, they won't get a check at all.