Third $1,400 Stimulus Checks: Democrats Make It Their Priority as They Take Control of the Senate

As Democrats took control of the Senate today, distributing the $1,400 third stimulus checks to Americans is one of their priorities.

In President Joe Biden's revelations of a new $1.9 trillion deal, he details the COVID-19 relief cash. Biden also unveiled that he aims to send the third $1,400 stimulus checks to Americans.

Within the thinnest of margins, Democrats still got the victory to control the Senate after Jon Ossoff and Raphael Warnock's twin victories in the Georgia runoff. Today, senators are sworn, clinching the party by 50-50 split in the upper chamber. 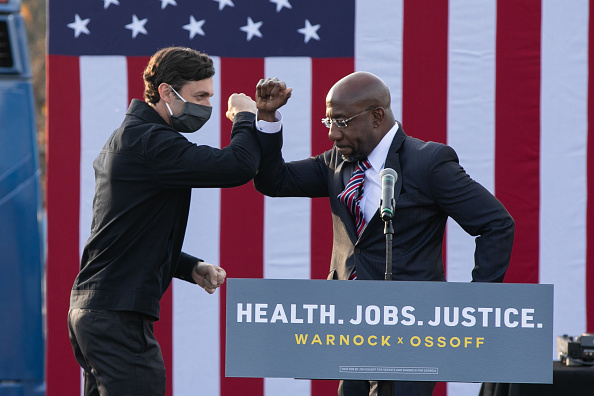 (Photo : Jessica McGowan/Getty Image)
Senate Candidates Warnock And Ossoff Hold Get Out The Vote Rally For Runoff Election STONECREST, GA - DECEMBER 28: Georgia Democratic Senate candidates Raphael Warnock (R) and Jon Ossoff (L) bump elbows during a "It's Time to Vote" drive-in rally on December 28, 2020 in Stonecrest, Georgia. With a week until the January 5th runoff election that will determine control of the Senate, candidates continue to campaign throughout Georgia.

Therefore, Vice-President Kamala Harris will be the one to cast a vote as a tie-breaker and would make it a good start for Biden's stimulus check plans to go through.

Meanwhile, Senate Majority leader Chuck Schumer vowed to pass legislation to provide Americans with $2,000 stimulus checks and be one of the first orders of discussion in the new Senate.

According to The Sun, American households have already received two stimulus payments since the COVID-19 pandemic began.

Stimulus check is less than what Biden promised

However, many Americans hoped for a fresh round of stimulus checks worth $2,000. The next wave of payments would be $1,400 under Biden's plan, a supplement of the $600 stimulus checks signed into action by Trump under that $900 billion stimulus plan in late December 2020.

During the runoff elections, on behalf of Warnock and Ossoff, President Biden said their election would hasten the direct payment delivery. This month. Democrats last controlled the White House, Senate, and House.

Read also: Americans Who Choose To Use Their Stimulus Money To Help Those in Need

$1,400 stimulus payments unlikely to be passed by January

The $1.9 trillion coronavirus relief plan called the American Rescue Plan seemed to face pushback from Republican lawmakers, as per CNBC. Last year, Republicans resisted Democrats' $2 trillion bill. Hunter Hammond, Heights Securities analyst, expects the ultimate package to be trimmed to $1-$1.5 trillion. However, most analysts claim lawmakers on both parties will back the $1,400 stimulus checks, which economists suggest as lifelines for many workers who lost their jobs or plumbed their income during the pandemic.

According to IB Times, millions of Americans would wait for another month to get their stimulus checks. Experts claim it is unlikely that Biden's $1,9 trillion bill will be passed in January.

Biden unveiled the latest coronavirus relief proposal Thursday evening, including provisions for funding the small business, aid for local, state, and tribal governments, as well as the third round of stimulus payments worth $1,400.

The process of passing the new stimulus bill may take several weeks, even if Democrats are expected to take control of both the House and the Senate. The earliest Congress could approve Biden's rescue package potentially would be in early February, as per the IBT.

Experts warned that Congress might pass a one-off bill to boost the amount of stimulus checks to $2,000 from $600. But the passing of the $2 trillion bill might take weeks of talks between Democrats and Republicans.