A total of 102 Republicans are committed in objecting to the electoral votes during the Congress' joint session on January 6, as per Epoch Times tally.

Objections must be supported by one rep and one senator 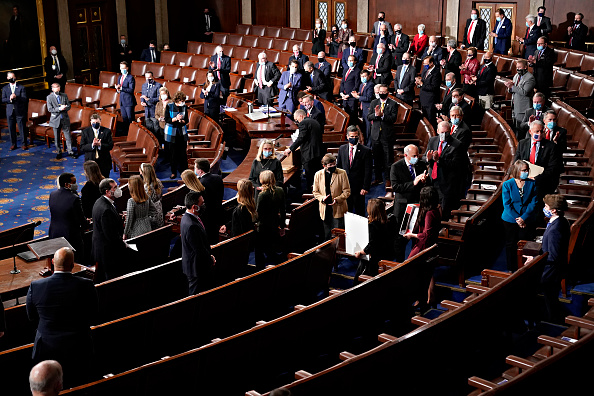 (Photo : Erin Scott - Pool/Getty Images)
Congress Holds Joint Session To Ratify 2020 Presidential Election WASHINGTON, DC - JANUARY 06: Electoral College ballot boxes arrive to a joint session of Congress to count the Electoral College votes of the 2020 presidential election in the House Chamber on January 6, 2021 in Washington, DC. Congress is meeting to certify Joe Biden as the winner of the 2020 presidential election, with scores of Republican lawmakers preparing to challenge the tally in a number of states during what is normally a largely ceremonial event.

The list includes 13 senators. Under the Electoral College system, Congress in Washington is urging to count ballots sent by state electors as Democratic presidential nominee Joe Biden ran against President Donald Trump, who ran for a second term.

The electoral votes' objections should be in writing and be supported by at least one senator and one representative. But the objection led to a two-hour debate and a withdrawal from the joint session, followed by a vote.

On Tuesday, Rep. Marjorie Taylor Greene (R-Ga.) told The Epoch Times that she is hoping the American people get to hear a small amount of evidence. On the other hand, House Speaker Nancy Pelosi (D-Calif.) told colleagues in a January 5 letter that House Democrats plan to use the debate time to present their "historical, constitutional, and thematic justification for respecting the will of the people."

In each chamber, a majority vote upholds an objection that would counteract the electoral votes.

In a statement Wednesday, 37 House Republicans, including House GOP Conference Vice-Chair Mike Johnson (R-La.), said the majority of both Congress houses might not sustain their support of objections in the joins session. "Our oath, nonetheless, is to defend and support the Constitution of the United States. And to 'bear true faith and allegiance to the same.' Taking this action today, as some critics charge, will not undermine our beleaguered institutions, but rather reinforce and defend them."

According to The Epoch Times, a candidate will win if he reaches 270 electoral votes. A second system is triggered to select the next president if neither candidate does, wherein each state's representatives combine in one vote. The Senate will follow the same process for the vice president. Here is the list of Senate and House of Representatives who pledged to object to the electoral votes, as per The Epoch Times:

On Wednesday, the Electoral College votes will officially be counted in a joint session of Congress. Many Republicans are expected to object to the counted votes from several states that Joe Biden won during the pushback from Vice President Mike Pence and Senate Majority Leader Mitch McConnell and President Donald Trump's pressure.

According to NBC via MSN, the first objection was in Arizona, which took place minutes into the proceedings Trump supporters stormed the Capitol. Parts of the building were placed on lockdown, and the congressional tally was briefly paused after protesters breached the Capitol steps and started to clash with police.