The Larry O'Brien trophy is coming home to Los Angeles 'where it belongs'.

Armed with their perseverance, dedication, teamwork, and the "Mamba" mentality, the LeBron James-led Lakers had brought back the glory of the Lakers franchise after a decade of drought.

The Lakers orchestrated a second quarter surge to take home their 17th title back to the 'City of Angels' as they conquered the bubble after three months of battling not only with other teams but also the ongoing pandemic and social injustices.

The purple and gold squad launched a dominating first-half performance, outscoring the Miami Heat early in the game to be up by 28 points at halftime, 36-64.

The Miami Heat tried to overcome the mountainous lead established by the Lakers early in the fourth quarter but the King made some final touches of his another triple-double performance in the finals, finishing with 28 points, 14 rebounds, and 10 assists alongside Rajon Rondo, who came out big off the bench, to seal the deal even minutes before the final buzzer at the bubble, NBA.com reported.

The bubble environment is not just a historic season for the NBA because of the isolation set up and sacrifices to salvage the NBA regular season and playoffs. It also witnessed record-breaking games, particularly in the Finals.

The 35-year old Laker star, LeBron James, became the only player to become the finals' MVP for three different franchises. He did it with Miami Heat, Cleveland Cavaliers, and now for the Los Angeles Lakers, CBS Sports reported.

LeBron also joined Michael Jordan as the only players in NBA history to win 4 regular-season MVPs and 4 finals MVPs.

According to ESPN, aside from the enormous achievement secured by the King tonight, his co-star Anthony Davis also got his first ring after eight seasons in his NBA career. He shared that he felt surreal after the final buzzer sounded. 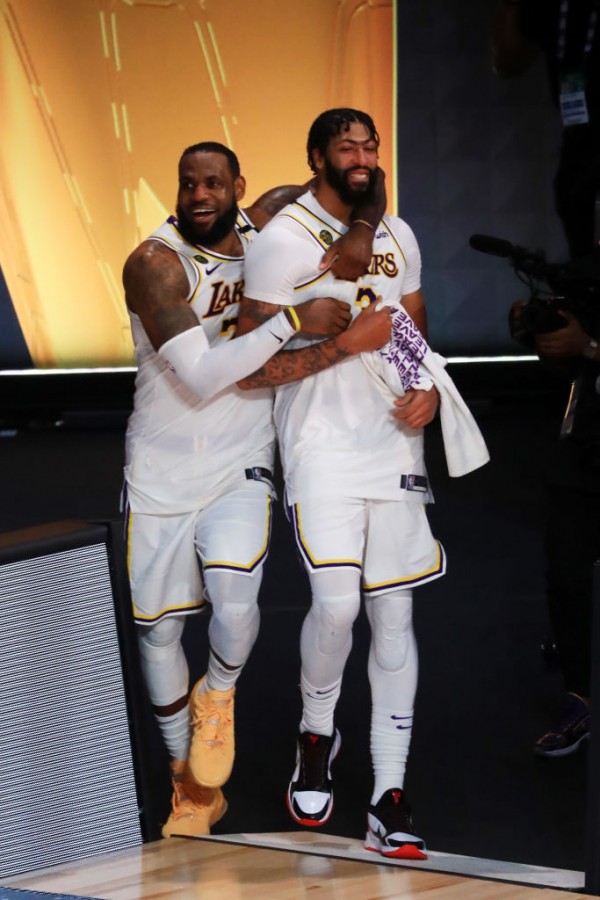 (Photo : Photo by Mike Ehrmann/Getty Images))
LAKE BUENA VISTA, FLORIDA - OCTOBER 11: LeBron James #23 of the Los Angeles Lakers and Anthony Davis #3 of the Los Angeles Lakers react after winning the 2020 NBA Championship in Game Six of the 2020 NBA Finals at AdventHealth Arena at the ESPN Wide World Of Sports Complex on October 11, 2020 in Lake Buena Vista, Florida. NOTE TO USER: User expressly acknowledges and agrees that, by downloading and or using this photograph, User is consenting to the terms and conditions of the Getty Images License Agreement.

The 'Brow' Anthony Davis was joined by his father, Anthony Davis Sr., who stated that he could put himself into quarantine even up to 30 days to see his son winning the title.

Danny Green also joined an elite company after winning his latest championship, as he now has three rings also with three different teams. He did it with San Antonio Spurs, Toronto Raptors, and his latest team, the Los Angeles Lakers.

Rondo became the second player to become champion for rival teams, Boston Celtics and Los Angeles Lakers, next to Clyde Lovellette, who won his first championship with George Mikan in Minneapolis Lakers uniform in 1954 and won two more alongside the Hall of Famer Bill Russell on the Celtics in the years 1963 and 1964.

When asked during the Finals MVP interview regarding the challenges that they faced in order to become the champions in the Bubble and the ongoing issues, The King shared that people need to continue pushing against anything that is opposite of love.

Despite the Game 5 loss in their mamba jerseys, Davis also shared during the interview that they needed to come back stronger and tougher on both ends of the floor for Kobe Bryant as they want to secure the series in just six games.