One of the most surprising happenings in the 2020 NFL Draft was the Green Bay Packers' decision to draft Jordan Love, the former quarterback of Utah State during the first round. This is despite the fact that they already have a quarterback in the team in Aaron Rodgers.

Aside from drafting a QB in the first round, it was also notable that they traded up just to get Love. The team's decision to draft a new signal-caller even earned the ire of Green Bay and Rodger fans. 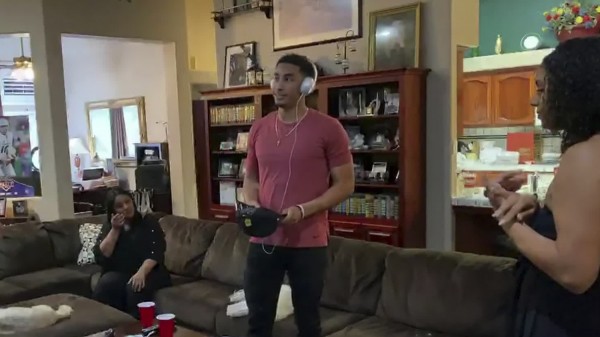 (Photo : Reuters/ Mandatory Credit: NFL/Handout Photo via USA TODAY Sports)
Apr 23, 2020; In this still image from video provided by the NFL, Jordan Love listens on his headphones during the NFL football draft Thursday, April 23, 2020, in Bakersfield, Calif. Love was drafted by the Green Bay Packers as the number twenty-six overall pick during the first round.

According to former, Green Bay quarterback Brett Favre, the controversial move may have burned a bridge between the team and Rodgers. He further added that since they did not draft anyone who could be a good addition to the team's weapons, not only in the first round but in the entirety of the draft, it could have sent a disrespectful message to Rodger.

Favre: "Green Bay is not going anywhere without Rodger."

Moreover, Favre also said that the Packers will not be able to make it without Rodgers in the next few years. He added that is Rodgers played like he was expected to, even without a first-round receiver, he could take the team places and give them a shot at the NFL title. Thus, he said that if he was the Packers he would do everything he could to be in a good relationship with the quarterback.

When he was asked if he thinks Rodgers would leave the Packers after the controversial draft, Favre said that his guts tell him that Rodgers will stay in the team. However, he also noted that there is a huge possibility that the quarterback will finish his career in a different team.

Meanwhile, Packers General Manager Brian Gutekunst said that they grabbed the opportunity to take Jordan Love during the draft. He also mentioned that he hasn't been in connection with Rodger yet, but he believes that the QB would understand his decision as a professional.

He also said that he needed to weigh in the short and long-term decisions for the Packers before proceeding with the draft.

According to reports, Rodgers has already reached out to Love after the draft, but there are no further details available.

Rodger is considered to be one of the best quarterbacks who ever played the game. He has brought one Super Bowl trophy to the Packers in his stay, although people say that he could give the team more titles with his talent.