Dr. Makary Says Returning to Normal by June Would Be a 'Win' 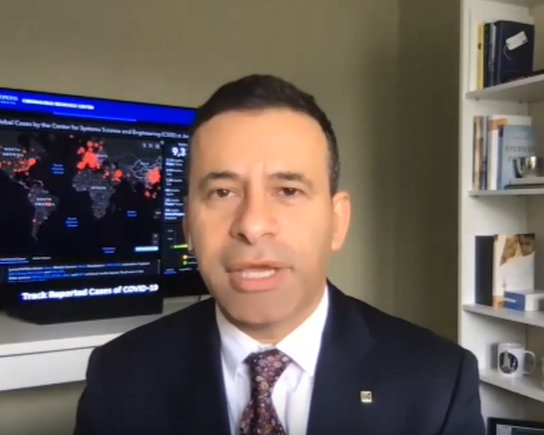 Dr. Marty Makary, a health policy expert at John Hopkins University and Fox News contributor, told "Your World" on April 1 that it would be a "win" in the war against the coronavirus pandemic if America could lift their lockdown and return to their normal routine by June.

Dr. Makary told host Neil Cavuto that if Americans can get the green light from the government by June, it would be considered a win. The plan is possible because America has achieved its public awareness goal although there were some stragglers.

Dr. Makary wants the U.S. to return to normal

Dr. Makary added that currently, the government is on "all hands on deck" situation and he would remind people that these mitigation and containment measures are temporary. Even though there are those who claim that authorities are being dramatic about the pandemic, Dr. Makary stated that the safety measures and protocols are all needed to help flatten the curve.

Also read: Trump Says 'We Will Come Back Strong' As He Plans to End U.S. Lockdowns

Dr. Makary also talked about the assessment of the situation from New York Gov. Andrew Cuomo, who stated that New York would reach its peak number of coronavirus cases at the end of April.

Dr. Makary said that he thinks that the peak is about three to four weeks away, and in some parts of the country that were behind chronologically, the peak may be five weeks away. There is a great chance that the country will get the green light and go back to normal around June, as long as people follow the temporary safety measures.

He then compared the outbreak in America to the outbreak in Spain, stating that the European country has a population that is similar in average age to America. Dr. Makary added that the numbers out of Spain were 862 deaths, and the number was reported on April 1 and that not everybody comes to a hospital. Spain is one-seventh the size of America and they still haven't had their peak. He said that Americans need to prepare for the worst and hope for the best.

U.S President Donald Trump stated that the reopening of the U.S economy by Easter will no longer be possible. He has changed his statement and extended the current guidelines on social distancing and lockdown until April 30 during a White House Rose Garden briefing. This means that America will be doing the measures that were taken by other countries to keep their populations at home in order to help stop the spread of the virus.

Currently, the United States has the highest number of coronavirus cases, with around 143,000 cases and counting, according to Johns Hopkins University. U.S has already surpassed the numbers of China and Italy.

According to a senior member of President Trump's coronavirus task force, Anthony Fauci, the outbreak could cause 100,000 to 200,000 deaths in the United States if the government won't impose a longer quarantine period. Dr. Fauci told CNN "I just don't think that we really need to make a projection when it's such a moving target that you can so easily be wrong and mislead people."