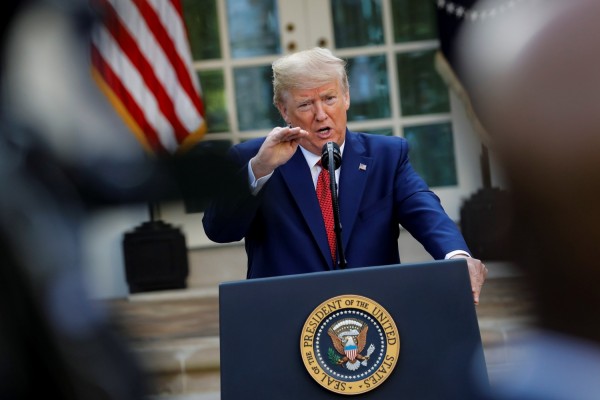 United States President Donald Trump announced that the US will be extending the implementation of its set of social distancing guidelines during a coronavirus press briefing at the White House, Sunday.

In his statement, Trump said that in order to slow the spread of the virus it is necessary to extend the guidelines. He also added that On Tuesday, they will be finalizing the plans and will provide a summary of their findings and inform the American people of their strategy to combat the virus.

As of Sunday evening, the US already has more than 135,800 confirmed COVID-19 cases which made it the new epicenter of the pandemic. The country also has reported a death toll of at least 2,391.

It can be recalled that the initial social distancing guidelines were issued by the Trump administration on March 16 in efforts to contain the outbreak. The implementation of said guidance was initially set to only last for 15 days and encouraged Americans to avoid group gatherings and advised people of old age to stay home.

The president also expressed his hope of the country recovering from the outbreak by June 1st, saying that a lot of great things will be happening after the country survives the COVID-19 crisis.

People living in New York, New Jersey and Connecticut has been advised to avoid domestic travel as the COVID-19 cases in these areas continue to rise.

The travel advisory was issued by the US Centers for Disease Control and Prevention (CDC) last Saturday. The "strong travel advisory urges residents of these states to refrain from non essential travel for two weeks, effective immediately. It was also stated that the states will have full discretion on the implemantation of the advisory, however, employees in critical fields are exempted.

The travel advisory was announced after Trump said earlier that day that he was already contemplating on implementing an enforceable quarantine for the New York metro, which he later on retracted through a tweet.

New Jersey Governor Phil Murphy reacted to the travel advisory stating that in fact most people are not really traveling a lot, but he is fine with the travel warning. He also added that his state is in full support of flattening the curve.

Majority of the US population is under restrictions.

According to CNN, there are already 215 million Americans who are trapped in their home due to several shelter in place and stay at home orders as of Saturday. They also stated that the number will rise up to 225 million by Monday which accounts for more than two-thirds of the country's population.

The growing number of COVID-19 cases in the country has also revealed new data on the demographics of those who are facing the severity of the illness.

There has been an increase in the number of cases in young adults; children were said to be those who are avoiding the harshest hit of the pandemic.