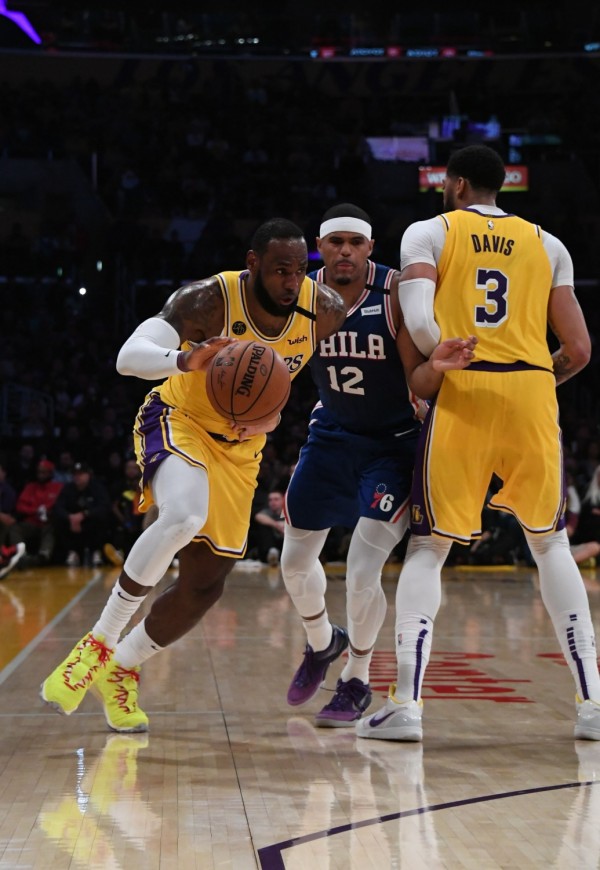 The undermanned Sixers failed to fireback at the Lakers as the "Lake Show" launched a 42-10 run to burn the Sixers' lead with Anthony Davis pulling at all sides of the court dropping 37 points, grabbing 13 rebounds, four steal, two blocks and shooting four out of five triples in the game while Lebron James finished the night with a near triple-double performance 22 points, 7 rebounds, and 14 assists, orchestrating the "Lake Show" victory.

The Sixers led by Tobias Harris dropped the early bomb taking a 13-point lead and showed hot shooting from the outside but 5:18 left in the first half, Anthony Davis ignited the Lakers running on both ends of the floor as he turned back the clock and displayed his handles over Al Horford and finished it with a hammer throw down as Lebron sparked the offense with dimes for his teammates and slices the Sixers' defense for a cruise in the paint to continue the 22-4 run.

With the clock whining down in the first half the Lakers' are not yet finished with Avery Bradley stealing the ball out of Big Al's hands and passes to Lebron as "The King" launched a bullet pass for Kentavious Caldwell-Pope's Slam and the story continues as Anthony Davis grabbed his own steal and finished coast to coast over the helpless Sixers' defense to finish the half with 18-second quarter points as the Lakers lead, 65-54.

The domination continues in the third frame as the Lakers' erupts with 10 consecutive points as Lebron James launches a long bomb in the logo area to extend the lead and just moments after he finds a trailing Javalle McGee from an Anthony Davis' steal as McGee finishes with slam to stretched the lead to 21 points, but the Sixers managed to cut the deficit into a single-digit courtesy of Tobias Harris and Glenn Robinson who scored 25 points in the game but Lebron and the crew finishes the third strong with Rajan Rondo beating the clock with a triple to put back the lead to 16 points.

Down in the game, the Sixers had a run of their own to cut the lead into single digit with Mike Scott dropping his triple but the Lakers' stayed on top Sixers over the shorthanded as the Lebron-Howard connection denies the Sixers' comeback as the "The King" continues to share the ball and with time under two minutes remaining Lebron drive into the paint and launched a kick-out pass for Avery Bradley who nailed the triple extending the lead to twelve as they close the game 120-107 win at Staples.

Winning their nine of the last 10 games the Lakers' sits at the top spot of the Western Conference (47-13) but with a heavy upcoming schedule with playoff contender teams the Lakers' will be put on a tests in the next two weeks with East best team Milwaukee Bucks as their next opponent.