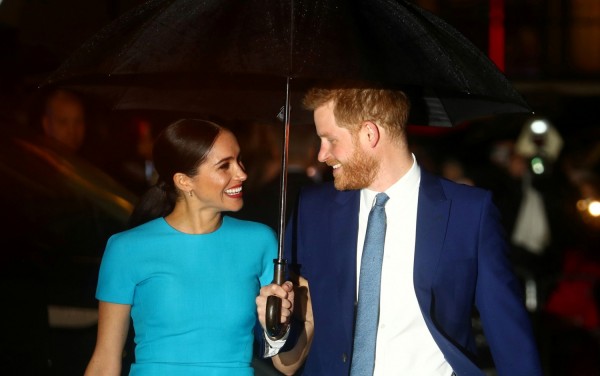 Prince Harry and Meghan Markle appeared in their first public engagement in the United kingdom since the infamous Megxit, Thursday.

The Duke and Duchess of Sussex arrived at London's Mansion House for the annual Endeavor Fund Awards amid the pouring rain, smiling broadly as they stepped out of their car.

As the couple made their way to the event, the place was surrounded by royal fans who cheered at them, but there was one boo from an onlooker that stood out. The booing, however, did not spoil the mood as Meghan told the audience that she was glad to be back.

Meghan and Prince Harry were present at the event to give honor to the achievements of the injured, wounded and sick men and women who took part in adventure challenges and sporting events last year.

However, all eyes were on the former 'royal' couple who has not made appearances in the country since announcing that they were stepping down from their royal duties in January and retreated to Canada with their son Archie, many to the Queen's distress.

Meghan upped the glamour stakes as she graced the event wearing a form-fitting turquoise dress designed by Victoria Beckham and wore heavy make-up. She matched the outfit with her blue suede heel, gold earrings and tied her hair back in a ponytail.

Read also: Kate Middleton May Quit Royal Duties Like Meghan Markle Due to This Reason

Prince Harry who was previously made to give up his official patronages after he decided to leave the royal life and move to Canada with his family was allowed to keep his private links to some organizations including The Endeavour Fund, which he is a patron of. The aforementioned charity supports people who use challenges with their physical, psychological, and social rehabilitation after injuries and illness.

During the event, Harry spoke to the audience and said that as some of the people have expressed their support for him, he assured them that they also have his full support always. His wife also took the stage and told the audience how incredible it felt to be back in the event.

Meghan presented the 'celebrating excellence' award to a rower who serves the Royal Marines for 24 years and lost his leg responding to a traffic accident, Lee Spencer.

The event is now on its fourth year and brings together hundreds of injured, wounded and sick serving veterans and personnel with their families and supporters from the military community, yearly.

During the reception, Harry and Meghan chatted with the wife of awardee Lee Spencer who complimented her on her amazing looks even when she just had a baby.

When Spencer's 52-year-old wife was asked on what were her thoughts on Harry stepping back from his royal duties, she said that she believes that Harry and Meghan are doing amazing and should be allowed to live the way they want to live.

Harry and Meghan have been center of talks in the past few weeks due to issues surrounding their bowing out of royal duties and has been escalated after talks of not retaining their " Sussex Royal" brand which they accepted but not without throwing shade saying that the British monarchy does not have jurisdiction over the word 'royal'.