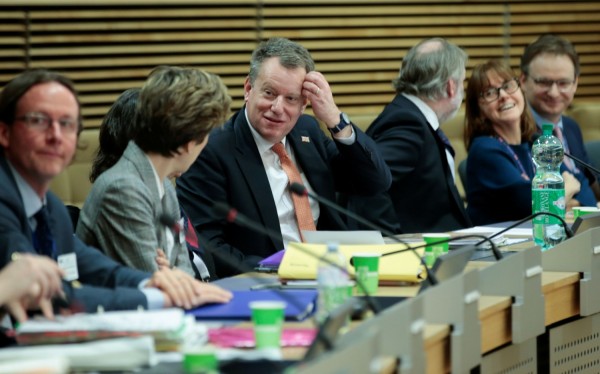 (Photo : Oliver Hoslet/Pool via REUTERS)
British Prime Minister's Europe adviser David Frost is seen at start of the first round of post-Brexit trade deal talks between the EU and the United Kingdom, in Brussels, Belgium March 2, 2020.

Paris has issued a warning that cross-Channel ports will be blocked by French fishermen British Government does not agree to a post-Brexit trade deal with Europe Union.

According to London loves Business, Europe has threatened Boris Johnson's government to prepare for a "very nasty battle," and that ports will be paralyzed if the French fishermen are left unhappy and in the absence of a trade deal.

Officials of the British government have stated that the there is a huge chance that the threat will follow through and that major ports will be blocked by EU fishing boats, including the port in Calais, The Times newspaper reported.

Should Johnson continue the restriction of fishing British waters, British ministers have raised their concerns regarding what could be a "nightmare scenario," since Calais is very much vulnerable for French protesters. This would highly affect the British economy because 17% of their goods cross the said channel.

With Dutch fishermen also threatening to take part in blocking the trades through Zeebrugge and Rotterdam, the blockades are expected to spread up to Belgium.

According to a Whitehall source of The Times, if the blockades would be pursued, they will become completely vulnerable and there is very little that they could do when it comes to moving their good across the short straits.

Furthermore, it was reported that French President Emmanuel Marcon issued warnings that unless they get a fisheries trade deal that satisfies their needs and demands with the fishermen of the United Kingdom, protests may happen which will spark civil unrest.

It can also be recalled that Marcon has made it clear in the previous months that fisheries agreements need to be put on the table or Britain will surely have a hard time during negotiations. This is in view of his promise to French fishermen that he will fight for them and their access to British waters in the Brexit negotiations. He also said that he would demand compensation if they are not given access to the British waters.

Marcon has since been under pressure to "demand no restrictions" when it comes to fishing in the lucrative waters of Britain on behalf of the French fishermen.

However, Britain has insisted that it will not sellout UK fishermen to favor the deal requested by the EU. Lord Forsyth of Drumlean even hit it out at the union saying that if the EU thinks that they are entitled to 60% of Britain's fishing, then Britain should also be entitled to 60% of France's grapes.

He also added that Britain remains an independent coastal state, but also said that it does not mean that Europe won't be allowed to fish n their waters only that it needs to be on their terms and interests.

Dubbed as the "Fishing War," the issue continues to threaten trade talks between the UK and EU, with the French President even threatening to walk away from the negotiations if there is still insufficient progress by June.