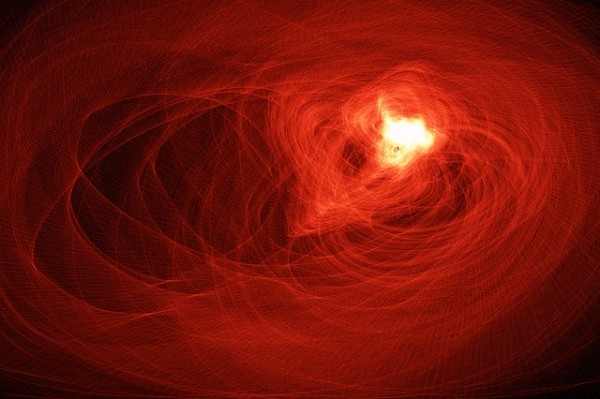 (Photo : Pixabay/ geralt)
Here is the final theory about the creation of the universe, that was a collaboration between Stephen Hawking and Thomas Hertog. This was published in the Journal of High Energy Physics.

Before the passing of Stephen Hawking, he made his last statement about the Big Bang theory based on the several cosmological theories to support it. Combining aspects of the String Theory and predicting the universe is not endless but a finite one.

Professor Thomas Hertog from KU Leuven, made the revelation at the University of Cambridge last year during the 75th birthday of Stephen Hawking. This was the first time it was ever presented in any scientific meeting.

The Big Bang theory began when the universe expanded from a singularity that inflated to become the vast universe it is now. However, the expansion of the universe will have parts that keep on moving away for eternity. Quantum interactions in these spaces of reality will go on forever with all the never-ending quantum activity. What is visible is a pocket universe that has stopped expanding and has settled already.

The universe is more than one, a "multiverse"

Inflating and expanding distances in the universe which is like a diamond with multiple surfaces, each plane is another pocket universe with smaller galaxies inside it. Laws of physics and chemistry might not be the same in all pocket universes that form a huge multiverse. Testing how many universes and multiverses exist is difficult to do or this theory has limitations and cannot be tested.

Hawkins and Hertog made mention that infinite expansion of the Big Bang theory needs revision. An expanding universe depends on Einstein's "theory of relativity," and all quantum interactions are the same and constant. The expansion will diminish the divide between classical and quantum physics that becomes very problematic for many. The theory of relativity answers some questions but gets broken in an expanding universe.

Based on calculations, the universe is smooth and with a finite structure, and it is not a fractal structure. According to Stephen Hawking, this is based on the eternal inflation model and the Big Bang theory.

The Theory of Eternal inflation is connected to the String Theory that tries to connect gravity, general relativity, and quantum physics that the universe is made up of minute vibrating strings. Their theory works with the string concept of holography that the universe is a huge and complex hologram. The reality is that 3D spaces could be reduced to 2D projections on any surface through math that can be seen but not visually.

Another variation of their holography concept to involve time as a factor in eternal inflation. This device does away with the theory of relativity (ToR). Eternal inflation exists without time, that is on a spatial surface at the start of all time but can work without time.

Before the moment of the Big Bang, there was no "time" at all in existence. When the Big Bang occured, time was released from the singularity. Time is now seen as infinite or finite according to theories to explain it.

This new theory is different from the older one, because it "predicts a finite time boundary," not like the older "no boundary theory" that was "infinite." It changes in "eternal inflation" suggesting a wall that time cannot pass, like the zero point of the Big Bang.

Both Hertog and Hawking used the theory to develop a hypothesis about the universal structure. A universe from the eternal inflation early in time is finite and easier to digest than the infinite fractal theory by the older version of it. By far, the Big Bang theory is now under scrutiny and Stephen Hawking with his collaborator, predicts the creation of multiverses as the mechanics are understood more.

Related Article: Two Binary Stars Caught in a Stellar Fight as They React to Gravitational Tides From Each Other