Democrats pushed hard to get the Social Spending Bill passed, which would expand social services and contribute billions to combat climate change. 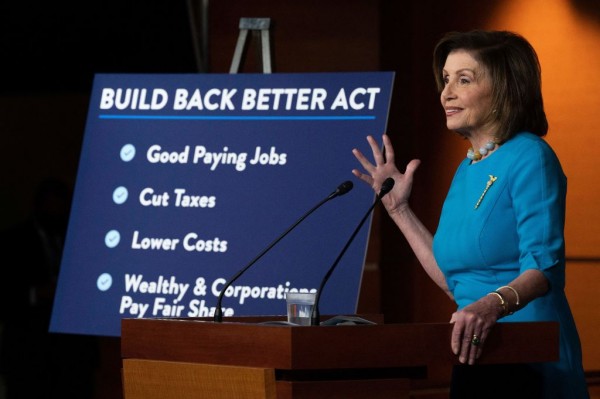 (Photo : Jim WATSON / AFP)
US Speaker of the House Nancy Pelosi, D-CA, speaks about the Build Back Better Act during her weekly press conference.

In a recently published article in The Hill, the large social spending bill at the heart of President Biden's domestic program will be voted on by House Democrats on Thursday evening, handing the besieged party a big triumph going into the lengthy Thanksgiving vacation.

House Majority Leader Steny Hoyer, who officially determines the floor calendar, disclosed the plan Thursday afternoon, only hours after Speaker Nancy Pelosi indicated that the measure will be brought to the floor before the end of the day.

After months of heated internal debate, Democrats took a sharp swing toward passage, indicating a growing feeling of agreement among liberals and moderates on the once-contentious spending package. Its passage would mark yet another big victory for Democrats, coming just days after Biden signed a separate bill into law to spend $1.2 trillion in the country's infrastructure, according to a report published in The Washington Post.

A cost study by the Congressional Budget Office (CBO), Congress's official scorekeeper, has been standing in the way of the vote, with employees working around the clock to compile more than a dozen tentative assessments evaluating the fiscal consequences of measures under different committees.

The CBO said Thursday around noon that 12 of the 13 cost reports had been made public as of Thursday afternoon, and that "the whole estimate" will be given later in the day, according to a recently published news article in CNBC News.

Since a few moderate Democrats postponed their support for Biden's massive "family" benefits package until those figures were available, the CBO analyses have been critical to the process. The moderates want guarantees that the bill is properly funded and that the CBO's statistics match those supplied by the White House and several House committees previously.

Moderate and Liberal Democrats are Optimistic about Bill's Passage

Rep. Kurt Schrader said that he did not see any differences based on the report from the CBO that will create a debate or tension among the lawmakers. Meanwhile, Rep. Dean Phillips, a moderate, had a similar view as the day progressed.

Liberal Democrats, who had pushed for a much bigger version of the plan, are also rooting for it to pass. Meanwhile, the chairman of the Congressional Progressive Caucus, Rep. Pramila Jayapal, pointed out that the moderate holdouts never demanded a thorough CBO analysis, merely enough "fiscal facts" to persuade them that the plan would not add to the deficit.

On the other hand, Democrats are hoping that House ratification of the massive benefits package, which comes the same week that Vice President Joe Biden signed a popular $1.2 trillion infrastructure plan into law, would help them turn their electoral fortunes around in time for the midterm elections next year.