400 Mawozo Gang Leader Releases a Video, Threatens To Shoot the Hostages in the Head if Ransom Goes Unpaid

If the requested ransom is not paid, the Haitian gang holding 17 missionaries abducted last week has threatened to kill the captives. 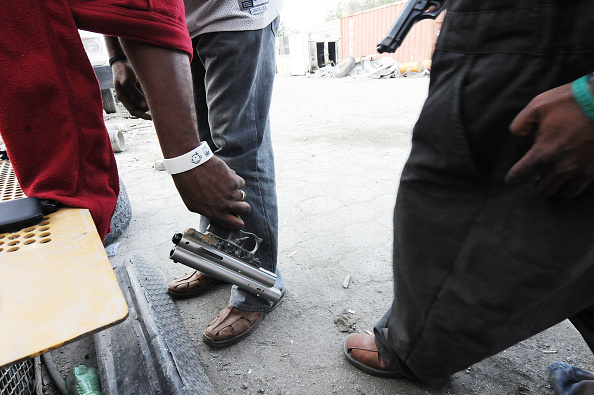 (Photo : Alpeyrie/ullstein bild via Getty Images)
Mawozo leader released a video and gave threats that they will shot the victims in the head if the ransom will not be paid.

In a recently published article in Newsweek, the leader of the 400 Mawozo gang issued a video warning on Thursday, including threatening Prime Minister Ariel Henry and the director of Haiti's National Police, Léon Charles, over their current demand.

The gang had demanded $1 million per captive, authorities claimed earlier this week, although it was not clear if the five youngsters in the group were included in the demand. 16 Americans, one Canadian, and their Haitian driver were abducted in all.

In the video, gang boss Wilson Joseph, wearing a blue suit with a big cross around his neck and a blue hat in his hand, said, "I swear by thunder that if I don't get what I'm asking for, I will put a bullet in the heads of these Americans," according to a published report in The Wall Street Journal.

Families of Hostages Sent a Letter

The families of those abducted are from Amish, Mennonite, and other conservative Anabaptist communities in Ohio, Michigan, Wisconsin, Tennessee, Pennsylvania, Oregon, and Ontario, Canada, according to Weston Showalter, a spokesperson for the religious organization. He read a letter from the families, who requested anonymity, in which they expressed gratitude to God for providing their loved ones with the rare chance to follow the Lord's mandate to love their adversaries.

The organization asked people to join them in praying for the kidnappers and the abducted and expressed appreciation for assistance from those who are informed and experienced in such circumstances, per INSIDER reports.

Meanwhile, according to a statement released on Tuesday by Haiti's ombudsman-like Office of Citizen Protection, a gang seized a Haiti university professor on the same day that the missionaries were taken. It further said that a Haitian pastor who was kidnapped earlier this month had not been freed despite a ransom being paid.

Meanwhile, in Haiti's capital, hundreds of protesters stopped highways and set fire to tires to protest a major gasoline scarcity and an increase in insecurity, as well as the prime minister's resignation. The protests were dispersed across Port-au-Delmas Prince's area.

In addition to kidnappings, the gangs are accused of blocking gas distribution facilities and stealing supply tankers, resulting in a gasoline scarcity, according to authorities. Many gas stations are now closed for days at a time. The shortage of gasoline has become so severe that Digicel Haiti's CEO stated on Tuesday that 150 of the country's 1,500 locations are out of diesel, according to a published article in Forbes.

Furthermore, some demonstrators carried banners that said, "Down with the High Cost of Living." In other places, demonstrators fought with police, who fired tear gas into the thick black smoke rising from burning tires that acted as barriers. A 34-year-old English and French instructor, Alexandre Simon, says he and others demonstrate because Haitians are in such perilous circumstances.

Related Article: Powerful Haiti Gang '400 Mawozo' Believed to be Behind the Kidnapping of 16 Americans, 1 Canadian Missionaries After Visiting an Orphanage in Croix des Bouquets