Lack of COVID-19 Restrictions: Mother Sues Wisconsin School District and Board as Son Got Exposed to a Student Showing Symptoms of COVID-19

After her child was exposed to a classmate who was displaying symptoms of the virus and became ill, a Wisconsin mother is suing the school district and school board for failing to implement COVID-19 restrictions. 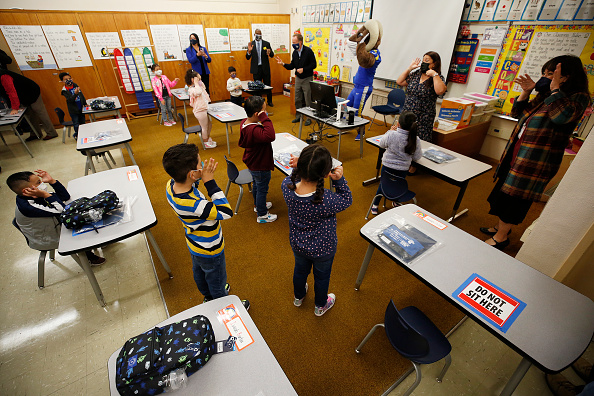 (Photo : Al Seib / Los Angeles Times via Getty Images)
A mother files a lawsuit after her son was exposed to another student who showed symptoms of COVID-19.

Lawsuit Filed in the U.S. Eastern District of Wisconsin

In a recently published article in Newsweek, Attorney Frederick Melms filed the complaint on behalf of Shannon Jensen, children in the Waukesha School District, and their families on October 5 in the United States Eastern District of Wisconsin.

The complaint, which was partially funded by the Minocqua Brewing Company Super PAC, seeks class-action status and an injunction requiring the school system to follow the Centers for Disease Control and Prevention (CDC) pandemic standards.

The Waukesha School Board, according to the lawsuit, removed the district's mask requirement and other mitigation protocols such as temperature checks and plexiglass dividers on May 12, which had been in place for the majority of the 2020-2021 school year, according to a published article in Our Community Now.

Read Also: Thousands of Students Forced to Quarantine After Exposure to COVID-19, Marking Rocky Start of Reopening of Schools

On the 16th and 17th of September, one of Jensen's oldest classmates arrived at school with COVID-19 symptoms and was sent home. Her kid sat next to the ill classmate both days, and the classmate did not seem to be wearing a mask on either day.

Jensen's eldest kid started to show signs of the virus two days later and tested positive for COVID-19. Jensen and her three children were then compelled to stay at home under quarantine. The other two youngsters would later test positive for the infection. As a consequence of the diagnosis, all three children missed school and extracurricular activities, according to a report published in NBC News.

Jensen claimed that the school system took too long to inform her that a kid in her son's class had tested positive for the virus; and as a consequence, her son socialized with others after his own exposure. According to the complaint, she also heard from another parent with a kid in the class that a total of four children had tested positive for COVID-19.

Jensen Alleges that there was No Contact Tracing, Quarantine Protocol Implemented

Jensen said in a statement filed with the complaint that there were no criteria for when the class would be quarantined and that the district did not do contact tracing. Administrators were sometimes "just barely notifying parents when a kid in the school had tested positive, typically many days beforehand," according to the report.

In a published article in TMJ4, Jensen said in the court declaration that the refusal of the Waukesha School District to implement reasonable COVID-19 mitigation strategies impacted not only their immediate family, but they could have prevented further community spread of the virus if they had been notified sooner of their oldest son's close contact with someone who had been diagnosed with COVID-19.

Both Waukesha School District administrator James Sebert and school board president Joseph Como refused to comment on the case in an email response to the news outlet.