German Chancellor Angela Merkel warned that further penalties against Russia may be applied if Moscow exploits a disputed gas pipeline against Ukraine. 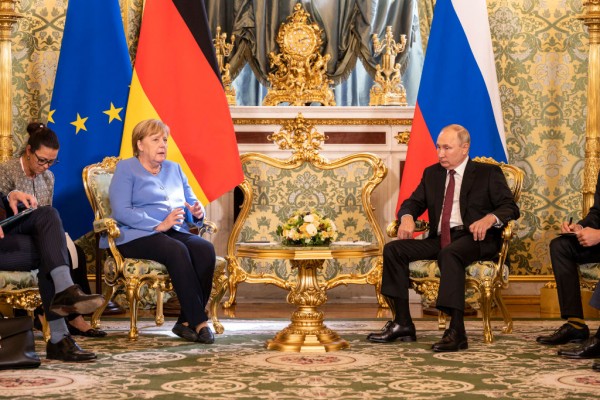 In a recently published article in Financial Times, Chancellor Angela Merkel tried to soothe and calm down Ukrainian worries over the almost finished Nord Stream 2 pipeline with her statement that Germany will not allow Russia to weaponize the gas corridor.

Merkel informed Ukraine's President Volodymyr Zelensky on her last visit to Kyiv before leaving office that she understood his worries over the Nord Stream 2 project. Zelensky opposes the pipeline, which he claims presents a security danger to Ukraine. It will travel under the Baltic Sea and increase Russian gas supplies to Germany by double.

Ukraine is concerned that the Nord Stream 2 gas pipeline, which is being built by Russia, would tighten Moscow's hold on the region's energy supply and increase its influence. Zelensky characterized the proposal as a geopolitical weapon of the Kremlin that would be destructive for all of Europe at a joint news conference on Sunday, according to a published article in MSN News.

Merkel said Gas Cannot Be Used as a Weapon

The building of NS2, which would transport Russian gas over the Baltic Sea to western Europe, is of particular concern to Kyiv, which stands to lose $2 billion in transit fees if Moscow stops supply via Ukraine. Critics argue that the $11 billion pipeline would exacerbate Europe's reliance on Russian energy exports.

However, Merkel said on Sunday after meeting Volodymyr Zelensky, Ukrainian president, in Kyiv that gas cannot be used as a weapon. She also added that Russia will face sanctions if they will do it. However, she did not give much details, according to a published report in Irish Times.

Merkel met with Russian President Vladimir Putin in Moscow two days before the Zelensky summit. She emphasized that Russia had signed a deal requiring it to continue delivering gas via Ukraine until 2024 and that the arrangement can and should be extended at that time.

Merkel, who is stepping down as Germany's chancellor after 16 years in office this fall, said Berlin and Washington agreed that Nord Stream 2 should not be used against Ukraine. If gas was "used as a weapon," she added, sanctions might be employed against Moscow under a German-US accord.

When the contract to transport Russian gas via Ukrainian pipes expires in three years, Zelensky expressed worry about what might happen. The loss of billions in transit fees would be devastating to Ukraine's economy, according to a published article in France24.

Meanwhile, Merkel pledged to contribute more than a billion dollars to assist Ukraine's renewable energy industry to grow during discussions with Russian President Vladimir Putin on Friday. Russia now provides approximately 40 percent of EU gas, just ahead of Norway, which is not a member of the EU but participates in its single market. The new pipeline will boost the quantity of gas that passes under the Baltic to 55 billion cubic meters per year.