Brooklyn Nets Might Make Changes in its Coaching Staff, Bucks to Advance to Eastern Conference Finals

The star-studded Brooklyn Nets fell short against the Milwaukee Bucks to advance to the Eastern Conference Finals. 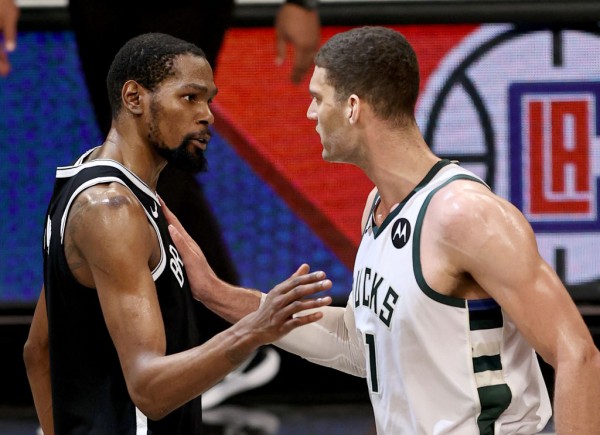 (Photo : Elsa/Getty Images)
Kevin Durant #7 of the Brooklyn Nets and Brook Lopez #11 of the Milwaukee Bucks talk after the game during game seven of the Eastern Conference second round at Barclays Center

The Milwaukee Bucks will advance to the Eastern Conference playoffs after defeating the Brooklyn Nets in Game 7 of their second-round series 115-111 in overtime, per CBS News.

Kevin Durant attempted a game-winning 3-pointer with just seconds left but failed, allowing Milwaukee to win. In the Eastern semifinals, the Bucks will play the victor of Sunday's Game 7 between the Atlanta Hawks and the Philadelphia 76ers.

Durant did all in his power to keep the Nets alive. He set a Game 7 record with 48 points and made an amazing shot after regulation to force overtime. However, Giannis Antetokounmpo scored 40 points, including the game-tying shot in overtime; and Khris Middleton sealed the victory with a mid-range jumper, according to ESPN.

Read Also: Will James Harden and Jeff Green Play in Game 3 Against the Bucks?

Nets May Restructure its Coaching Staff

In a recently published article in the New York Post, it remains to be seen if rookie coach Steve Nash will need to reorganize his coaching staff. Mike D'Antoni, his right-hand guy, is a leading contender for the Trail Blazers' vacancy. Warren LeGarie, D'Antoni's agent, is friends with Blazers general manager Neil Olshey.

The Nets' aim for the next season is to win the championship alongside James Harden, Kevin Durant, and Kyrie Irving. Nothing has changed since losing in the second round to Milwaukee.

Furthermore, coaching sources think Nets assistant Ime Udoka is a genuine candidate for the Celtics position. When he was still a Knicks contender, Udoka had a good showing. According to one NBA coaching insider, Chauncey Billups will be D'Antoni's main rival in Portland. It was also reported that NBA Commissioner Adam Silver is pushing for more African-American head coaches.

In Game 7, Nash utilized an eight-man rotation. Surprisingly, the Nets did not have a single bench player. In fact, none of their three substitutes attempted a shot. Landry Shamet, Jeff Green, and Nic Claxton all failed to make a shot; and Nash opted not to use backup guards Mike James and Tyler Johnson.

The scheme to play a weakened Harden for full 53 minutes in Game 7 backfired as he went 2-for-12 from 3-point range. Durant also played all 53 minutes and was exhausted in overtime and fell short during the last seconds in the game.

Meanwhile, it is also unclear if the star player James Harden requested to play the whole game. During the post-game press conference, Brooklyn Nets Head Coach Steve Nash did not address it or even comment on it.

Nets president Sean Marks took a chance on Nash, who had never worked as an assistant coach before. Marks passed on Tyronn Lue, who was hired by the Clippers and led them to the Western Conference finals, where they were defeated by the Suns in Game 1 on Sunday, 120-114.

Despite losing Kawhi Leonard to a severe knee injury in the middle of the game, Lue's Clippers defeated Quin Snyder's Jazz. On the other hand, if D'Antoni and Udoka go, Nash and Marks may have to modify the coaching staff.