Will James Harden and Jeff Green Play in Game 3 Against the Bucks? 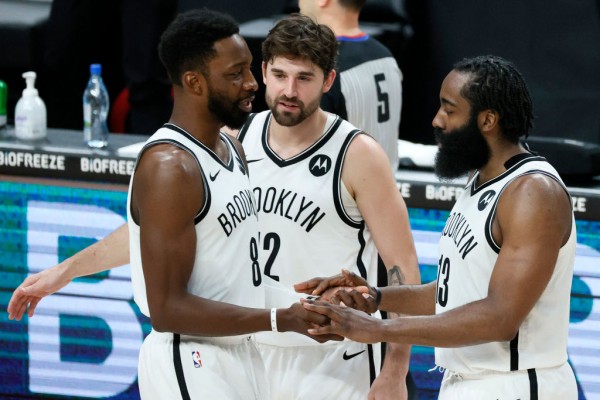 (Photo : Steph Chambers/Getty Images)
Jeff Green #8, Joe Harris #12 and James Harden #13 of the Brooklyn Nets react after a play against the Portland Trail Blazers during the fourth quarter at Moda Center.

Harden and Green Will Miss Game 3

In a recently published article in Forbes, it was reported that both James Harden and Jeff Green will miss Game 3 for the Brooklyn Nets on Thursday night in Milwaukee. However,t Green is optimistic that he will be able to play later in the series.

Meanwhile, Steve Nash, Head Coach of Brooklyn Nets, said "We're optimistic that we can have him back at some point, but we can't set a timeline yet." Nash is referring to the status of James Harden, according to a published article in the Sporting News.

It can be remembered that James Harden was forced to depart Game 1 after only 43 seconds of play. Despite being diagnosed with "right hamstring tightness," an MRI found no structural damage, according to Nets Daily.

Additionally, Green is also officially out for Game 3, but he stated on Wednesday that he was "feeling good" and "getting better day by day." The reports confirmed that both Harden and Green will be out for Game 3 against the Bucks.

Green also said that being out of the court is very painful for him but he is always at the sideline to show his support to the team.

The previous performance of Harden and Green

The Brooklyn Nets is one of the superstar teams in the NBA today. They almost have the key players to win the finals. Most sports enthusiasts and basketball experts agree that the Nets have a big chance of winning the title.

Harden averaged 27.8 points, 10.6 assists, and 7.2 rebounds per game in the Nets' first-round series against the Celtics, shooting 55.6 percent from the field and 47.5 percent from outside the arc. Meanwhile, Green averaged 11.0 points and 3.9 rebounds in 68 regular-season games, shooting a career-high 41.2 percent from 3-point range.

Other Star Players in the Brooklyn Nets

So far, neither player has been missed by the Nets, as others like Blake Griffin, Joe Harris, and Mike James have stepped up to provide offensive assistance for Kevin Durant and Kyrie Irving to make sure that they will lead the series.

The Nets have a 2-0 lead in the best-of-seven series after defeating the Bucks by 39 points in Game 2 on Monday night. They have a 93 percent probability of winning the Eastern Conference series, according to sports analysts. On defense, Durant, Nic Claxton, and the Nets have limited Giannis Antetokounmpo to 23-of-39 shooting from the field and 2-of-10 from the free-throw line.

How important is Jeff Green in the Nets' campaign in the finals?

Green is seen as an important frontcourt player for the Nets as they proceed in the playoffs, both against the Bucks and perhaps against the Philadelphia 76ers if both teams get to the East Finals.

Green, who averages 11.0 points and 3.9 rebounds per game, claimed he can sprint but could not cut hard because of the plantar fascia ailment. He said he exacerbated it again in Game 2 when Harden fed him for a slam. He is now experiencing "discomfort," which he compares to a "very, very terrible sprained ankle."