On Friday morning, Miss Universe 2021 contestants combined fashion and politics during the 69th annual beauty competition's national costume round. Although the national costume contest is different from the overall pageant ratings, it is one of the most anticipated and glamorous runaway affairs.

Per Hola via MSN, designers and contestants from 74 countries perform on a world scale in original and lavish outfits to celebrate the spirit of their homeland and traditions. This year, designers of the gowns drew inspiration from national flowers, traditional food, temples, national symbols, flora and fauna, and even natural landscapes to make elaborate and glitzy costumes that highlighted the most unique and charming elements of each of their countries. 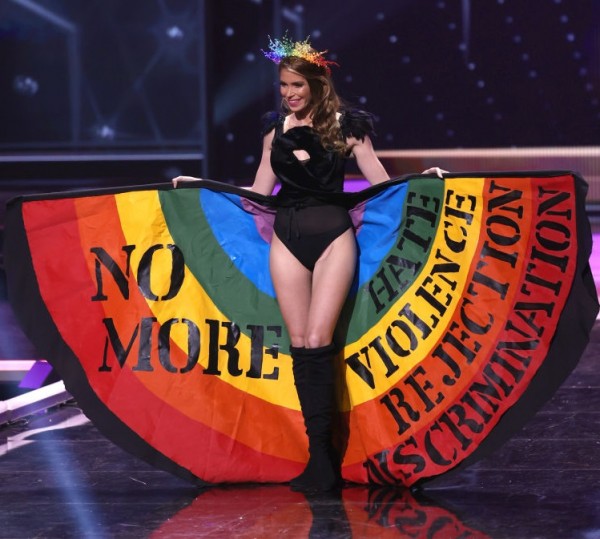 The official representative for Uruguay, Lola de Los Santos Bicc, appeared onstage at the Seminole Hard Rock Hotel and Casino in Florida, dressed in a multi-colored outfit with a strong message that read: "No more hate, violence, rejection, discrimination."

Miss Myanmar, Thuzar Wint Lwin, was among those calling for their message to be heard, holding up a sign urging prayers for her country. The Asian country has been in turmoil since the military staged a coup on February 1, disputing the outcome of an election in which a pro-democracy group won power. People across Myanmar have been rising against the governing junta, launching large rallies met with military repression and resulting in hundreds of deaths.

Miss Singapore Bernadette Belle Ong, who wore thigh-high red boots, chose to incorporate her strong message into her costume, Daily Mail reported. In a sequined bodysuit with a hashtag on a floating cape, the beauty contestant brought attention to the #StopAsianHate campaign. 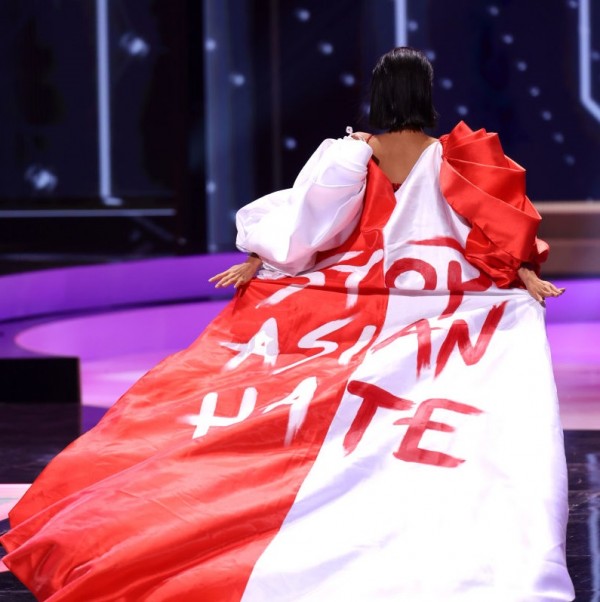 Miss Philippines Rabiya Mateo, who stood out in a pair of red and blue wings and three stars that reflected the colors and symbols of her country's flag, was another unforgettable performer. The three stars in the Philippine flag reflect Luzon, Visayas, and Mindanao, the country's three major island groups. Rabiya finished her eye-catching look with mismatched but color-coordinated shoes, wearing her black hair loose and wavy. 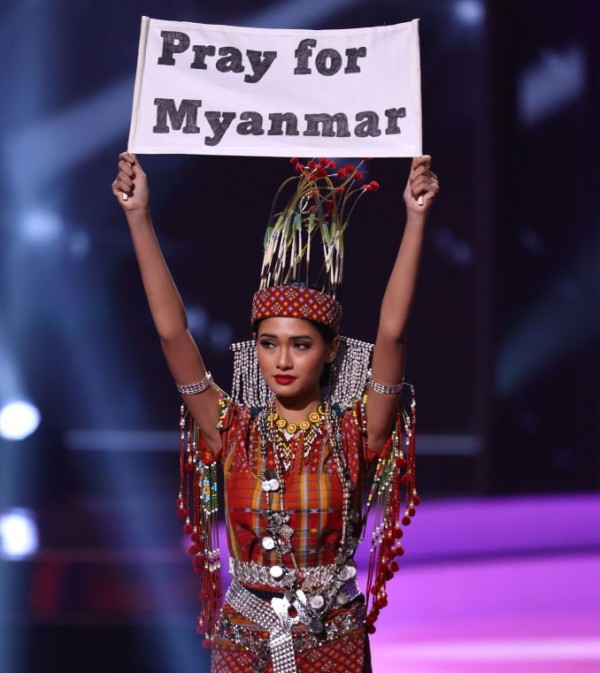 Miss Universe Myanmar Thuzar Wint Lwin was told her suitcase containing her competition costumes had been lost by the airline when she landed in Florida on May 7. The majority of the contestants had already arrived and were rehearsing, recording, and doing photo shoots.

Since her bag had not arrived by the end of the week, the pageant organizers assisted her with a gown. Other contestants were lending her costumes as well. Her national costume was among the things that had gone missing. People from Myanmar living in the United States presented her with a beautiful ethnic Chin replacement. On Thursday, she wore it to the joy of the audience.

She waited anxiously before flying to the United States to see if her name had been added to the military's wanted list. She had heard about well-known people being arrested when they attempted to flee the country, so she opted to hide at the Yangon airport by wearing a hoodie and glasses.

In an interview from Florida, she said, "I had to walk through immigration and I was so scared." Thuzar is currently unsure where she will go after the competition. She was informed she could not return to Myanmar because she used the 69th Miss Universe Competition to protest the military coup in her country, New York Times reported.