The reconciliation between Prince Harry and Prince William could take a long time. Since Prince Harry, 36, and his wife Meghan Markle stepped down from their royal duties, the two have allegedly had a split, given the news that Prince William, 39, approached his younger brother about the rapid pace of his relationship with Markle.

Is Prince Willian hesitant to reconcile with Prince Harry? 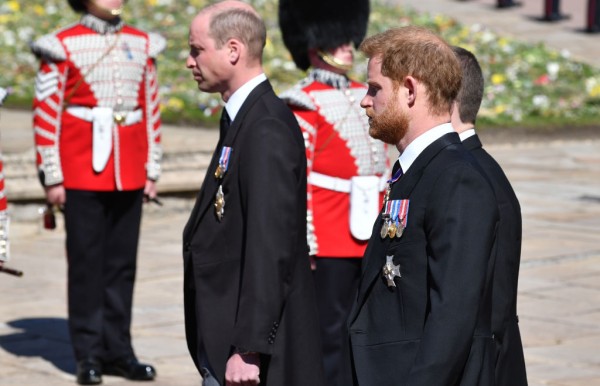 (Photo : Mark Large-WPA Pool/Getty Images)
The Funeral Of Prince Philip, Duke Of Edinburgh Is Held In Windsor WINDSOR, ENGLAND - APRIL 17: Prince William, Duke of Cambridge; Prince Harry, Duke of Sussex and Peter Phillips walk behind Prince Philip, Duke of Edinburgh's coffin, carried by a Land rover hearse, in a procession during the funeral of Prince Philip, Duke of Edinburgh at Windsor Castle on April 17, 2021 in Windsor, United Kingdom. Prince Philip of Greece and Denmark was born 10 June 1921, in Greece. He served in the British Royal Navy and fought in WWII. He married the then Princess Elizabeth on 20 November 1947 and was created Duke of Edinburgh, Earl of Merioneth, and Baron Greenwich by King VI. He served as Prince Consort to Queen Elizabeth II until his death on April 9 2021, months short of his 100th birthday. His funeral takes place today at Windsor Castle with only 30 guests invited due to Coronavirus pandemic restrictions.

The pair met for the first time in over a year on Saturday for the funeral of their grandfather, Prince Philip, Duke of Edinburgh. It was reported that they had a lengthy conversation, which was attributed to Prince William's wife Kate Middleton serving as a "peacemaker," according to a recent report. However, Prince William prefers to take it slowly when fixing their relationship, as per Fox News.

The brothers set their drama aside for the time being at their grandmother, Queen Elizabeth II's, request. A royal family friend told Vanity Fair contributor and royal expert Katie Nicholl.

Prince Philip's Funeral Won't Heal Royal Rift, Harry and William Won't Stand Next to Each Other

Prince Harry will travel home to the United States without having "one-on-one" conversations with either his father or brother because neither trusts him enough to talk with him alone, sources told Page Six. Following Prince Philip's funeral on Saturday, Harry, Prince William, and their father, Prince Charles, had a three-way "clear-the-air talk" at Harry's U.K. home, Frogmore Cottage, sources said.

According to the reports, Charles and William would only speak to Harry if there were witnesses to what was said since the heir to the throne and his elder son were concerned that a distorted version from Harry's camp would leak out. When Charles and William contacted Harry last month after he and his wife Meghan Markle gave Oprah Winfrey a bombshell interview, Gayle King immediately reported the story, revealing the talks were "not fruitful," as per The News.

The three-way conversation on Saturday did not fully heal the rifts in the high-profile family. It emerged after Harry and Meghan made a tell-all in which they accused the royal family of racism.

Prince William, Prince Harry had a short conversation in public

On Saturday, as they walked up to Windsor Castle from Prince Philip's funeral service at the St. George's Chapel, Prince Harry and Prince William were seen having a short, amiable conversation. The talk, on the other hand, was just a few minutes long and held in public. Prince Harry is expected to return to California shortly to his pregnant wife and their 23-month-old son Archie.

"Not only Charles and William, but even Harry, want to keep their reconciliation secret. Gayle King isn't required to report on private family matters." Prince Charles has returned to Wales to mourn his father's death in private at his Welsh home, Llwynywermod in Llandovery, Daily Mail reported.

Prince Harry may also be in the United Kingdom to celebrate Queen Elizabeth II's 95th birthday on Wednesday. Although Her Majesty canceled all formal celebrations, including the unveiling of a new photograph, Harry will be allowed to join her for a stroll outside under the U.K.'s COVID-19 guidelines.

Harry's return to the U.K. for the funeral of Pince Philip, who died on April 9 at the age of 99, was the first in more than a year since he and Markle left their roles in the royal family. Despite not being granted medical approval to travel, Markle sent a handwritten letter set on top of a wreath at Prince Philip's funeral and watched the service on T.V. from her home in California.