Prince Philip's Funeral Won't Heal Royal Rift, Harry and William Won't Stand Next to Each Other

On Saturday, during the televised funeral service of their grandfather, Prince Philip, all eyes will be on Prince Harry and Prince William. After Prince Harry's shocking tell-all Oprah Winfrey interview with his wife, Meghan Markle, last month, the estranged brothers have not seen each other face to face.

The brothers will both be on Saturday's funeral procession for the late Duke of Edinburgh, but they will not be standing next to each other, ET reported.

Prince Harry, Prince William will not stand next to each other 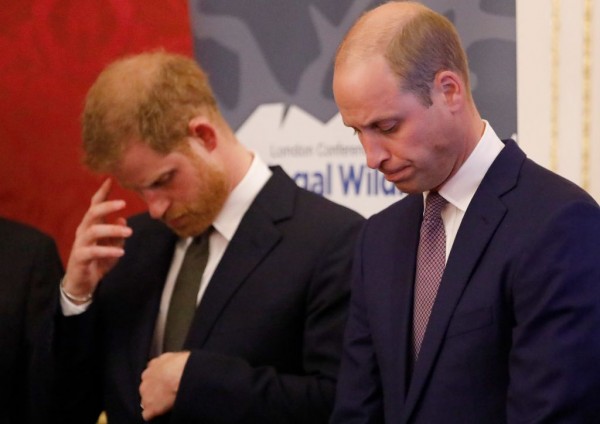 As a result, there will be no photos of Prince Harry and Prince Willian standing shoulder to shoulder during the service, which will take place at Windsor Castle's St. George's Chapel. For the solemn day, Peter Phillips, Princess Anne's son, will stand between Prince William and Prince Harry.

Comparisons to the sad scene in 1997 wherein the brothers walked behind Princess Diana's coffin at her funeral will undoubtedly be made as the brothers walk behind Philip's coffin. According to COVID-19 protocol, the private ceremony will have a limit of 30 guests, most of which will be immediate family members. Three of Philip's relatives from Germany have also been invited, according to ET.

The royal family's young children are not supposed to attend. The royal family will be dressed in a day dress or morning coat with badges, while the congregation will wear masks. Military uniforms will not be worn.

After Prince Harry arrived in the United Kingdom, a source told ET that the brothers have been in contact by phone. Following his flight from Los Angeles, the Duke of Sussex is reportedly quarantined.

In the funeral procession behind their grandfather Prince Philip's coffin, the Queen has demanded that Prince Harry and Prince William be separated. The brothers will walk side by side but will be separated by cousin Peter Phillips, who will stand between them.

The Queen has given her approval to the arrangements that will see Harry and William accompany Philip's coffin to St. George's Chapel, Mirror reported. She checked on "every single" aspect of her husband's funeral to ensure that his wishes are honored amid the pandemic. Nothing "should detract from what the day is about, commemorating her husband's remarkable life," Her Majesty was said to have insisted.

A royal author said Prince Harry and Prince William's royal feud stems from "very deep problems that cannot be settled" at Prince Philip's funeral. For the first time since Meghan Markle told Oprah Winfrey that an unidentified prince made racist comments about her unborn child's skin color, the bickering brothers would meet in person.

Though the mystery family member's name remains unclear, the Duke of Cambridge openly denied they were a racist family in the days after the interview. Some commentators had hoped that the sad event of their grandfather's death would provide the brothers with a chance to mend their strained relationship.

However, it has since been revealed that they would not walk side by side behind the Duke of Edinburgh's coffin, as per Newsweek. Instead, they will be separated by cousin Peter Phillips as the world sees Queen Elizabeth II bid her husband farewell.

Historian Robert Lacey's book, "Battle of Brothers," will be re-released later this year in a much-anticipated second edition, in which he will shed new light on the rift between Prince Harry and Prince William. Just days before his and Meghan's Oprah Winfrey interview on March 7, Harry officially lost his honorary military titles, including the prestigious rank of Captain-General of the Royal Marines.

"It would be a visible example of how broken the brothers' bond is, and of how overblown was the talk of their grandfather's funeral heralding a rapprochement," former BBC royal reporter Peter Hunt wrote on Twitter.

It will be a visible reminder of how fractured the brothers’ relationship is and of how overblown was the talk of their grandfather’s funeral heralding a rapprochement. #PrincePhilip https://t.co/78bndkNlfk

"Even for just 8 minutes, neither was prepared to tolerate walking side by side. #PrincePhilip."

Even for just 8 minutes, neither was prepared to tolerate walking side by side. #PrincePhilip https://t.co/32tpJSVqA3